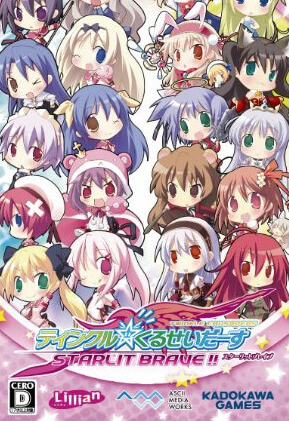 Twinkle Crusaders (ティンクル☆くるせいだーす, Teinkuru Kuruseidāsu, commonly abbreviated as Kurukuru (クルくる)) is a Japanese visual novel developed by Lillian, and was originally released as an adult game for Windows on September 26, 2008. The game is described by the development team as a "Heart-pounding exciting student council love comedy" (どきどきワクワク生徒会ラブコメ, Dokidoki Wakuwaku Seitokai Rabukome). The gameplay in Twinkle Crusaders follows a linear plot line, which offers pre-determined scenarios and courses of interaction, and focuses on the appeal of the five female main characters.

The player assumes the role of Shin Sakura (咲良シン, Sakura Shin), the protagonist of Twinkle Crusaders. Shin is the student council president of Ryūsei Academy (流星学園, Ryūsei Gakuen), a position which he thought came with free meals from the cafeteria, as he has been raised in a poor family and is in need of money. Unfortunately there's no such thing as a free meal.

Twinkle Crusaders is a combination of visual novel and turn-based strategy game. The novel portion consists of large amounts of often comedic conversations between characters, based on selections the player makes. There are also a lot of Easter eggs hidden within the game that can be discovered by choosing certain options during gameplay. The battle portion of the game consists of turn-based "scenes" where the player must reduce the opponent's Hit Points (HP) to zero using various battle strategies. In order to proceed with the story, the player must successfully defeat the enemy.

Twinkle Crusaders was first announced as the first project to be developed by the visual novel developer Lillian in the Japanese bishōjo magazine Tech Gian, on November 21, 2006. Art direction and character designs were provided by Rei Kannagi and Kotamaru who assisted Kannagi in the process. While the scenario in the game was worked on by Shigeta and Hideto Mayura, with Hozumi Nakamoto who provided assistance in the preparation of the story. The music in the game was composed entirely by Amedio. With the exception of Hozumi Nakamoto, the entire development team has previously worked on previous titles developed by Pajamas Soft, such as Prism Ark.

Before the game's release, three game demos were distributed online at the visual novel's official website, while a separate demo were distributed at retail stores. The demos gave the player a glimpse into the characters and the story of the game, and also introduced the player to the gameplay system, typically the battle system used in the game. The full game was first released on September 26, 2008, as both a limited edition and a premium edition. The limited edition release included the game itself, an arrange album titled Kira-kira Sound Festival, an art collection by twelve different artists, and a clear plastic casing. The premium edition release included the extras found in the limited edition release along with a silver necklace, and is limited to one-thousand units. An all-ages version entitled Twinkle Crusaders GoGo! was released for the PlayStation Portable published by ASCII Media Works on September 9, 2010, and contains additional content not found in the original release, namely a new heroine and promoting a sub heroine to heroine status. A release for windows 7 named Twinkled Crusader Remaster was released on 24 June 2010, since this was released before Twinkled Crusaders GoGo!, it does not contain the extra content from it.