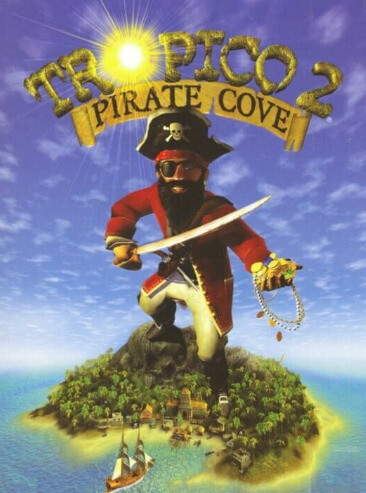 Tropico 2: Pirate Cove is a 2003 city-building game developed by Frog City Software and published by Gathering of Developers. It is the sequel to Tropico.

Tropico 2 was a commercial success, with sales above 300,000 copies. The review aggregator Metacritic designated the game's critical reception as "generally favorable". Following the acquisition of the Tropico license by Kalypso Media in 2008, that company published four sequels to Tropico 2: Tropico 3, Tropico 4, Tropico 5 and Tropico 6. The first three sequels were developed by Haemimont Games, while Limbic Entertainment developedTropico 6.

Tropico 2 is a city-building game. Though much of it is based on the original Tropico, the gameplay is very different. The player runs a pirate island and, as the Pirate King, must keep the pirates happy while stealing as much booty as possible. Workers, called captives, are taken on raids, from shipwrecks off the player's island, or from nations with which an alliance has been established. The captives are responsible for production and construction on the island. They can take on most of the jobs available, including farmer, lumberjack, and blacksmith, and can even be promoted to a pirate. Skilled captives may perform more specialized jobs which unskilled captives cannot. Still, the main goal of the game, other than the objectives stated in a scenario, is to stay in power, much like the original Tropico.

To keep captives happy, certain needs will need to be fulfilled, such as food, rest, religion, fear, and order. Pirates, however, prefer anarchy and defense, along with grub, grog, wenches, and betting from various entertainment buildings as well as resting and stashing at personal homes. Anarchy measures the level of disorder in an area and mostly comes from entertainment buildings. Captives are prevented from escaping through the fear mechanic, which is maintained by special structures. Escaped workers may report to other monarchs and cause uprisings. Pirate ships may be built at boatyards or shipyards, and are used to plunder other islands or board enemy ships to steal gold with which the player can build a greater pirate base and occasionally wealthy captives, who do not work but have a ransom that increases as they use entertainment buildings. There are also several challenging scenarios in which the goal is to survive in harsh environments, from angry pirates to escaping captives.

The game offers fewer choices for development compared to its predecessor. In Tropico, the economy could be focused on industry, tourism, military despotism, commodities, or a combination of all four. In Pirate Cove, the player is more limited in scope and path, and will end up building many of the same buildings every time with few additions, which means Pirate Cove does not have the emphasis on spreadsheets and statistics that its predecessor did.

Tropico 2 is the first game to have a campaign in the series, in which each scenario has a goal to be accomplished within the time limit. Goals can range from constructing certain structures, having enough money in the treasury or personal stash, ensuring overall pirate happiness is above a certain point, achieving harmonious relations with a faction, and having a certain number of ships on the island. The campaign follows a pirate king whose traits change as the campaign goes on.

In the United Kingdom, Tropico 2 sold poorly during the first half of 2003. Kristan Reed of GamesIndustry.biz wrote that it was "struggling to sell upwards of 5k", and speculated that software piracy could be the cause. According to former members of Frog City employed at Sidecar Studios, Tropico 2 sold over 300,000 copies worldwide and was commercially successful. The review aggregation website Metacritic designated Tropico 2's critical reception as "generally favorable".

Kristian Brogger of Game Informer summarized Tropico 2 as addictive and "a blast", and noted its "irrepressible charm". However, he called the game a small step down from Tropico, and found its pirate setting unoriginal and its gameplay repetitive. In Computer Gaming World, Di Luo considered Tropico 2 to be a missed opportunity, and found its new mechanics limited and "tedious" compared to the gameplay of its predecessor. Although he enjoyed its theme and audiovisual style, he found that Tropico 2 contains "nothing to set it apart from the crowd." However, Luo argued that the game never loses its "inexplicable charm", and that it "never really gets bad".

Writing for IGN, Barry Brenesal called Tropico 2 an improvement upon Tropico, thanks to its "more open-ended quality" and new setting. He praised its interface, particularly the logbook, and called the game a refreshing standout in the management simulation genre. While Brenesal considered certain aspects of Tropico 2 to be unintuitive, he highlighted its "strong economic engine, and well-balanced gameplay." IGN went on to name Tropico 2 "IGNPC's Game of the Month" for April 2003. Conversely, Jason Cross of Computer Games Magazine called Tropico 2's interface superior to that of Tropico, but he felt that the game featured "too much interface and busy work." He found it dated compared to current strategy games, and concluded, "Tropico 2 doesn't come through with enough swashbuckling, ship-boarding flair."

PC Format's Matt Avery summarized Tropico 2 as "short-lived fun with information overload in place of interaction." Although he remarked that "statisticians will have a field day" with the game's detailed economics, he disliked Tropico 2's lack of direct control over units, and found the overall product "rather limited." Writing for PC Gamer US, Stephen Poole criticized the game's combination of piracy and management gameplay, which he found awkward, unrealistic and unsatisfying. He also argued that the game's musical style is incongruous with its setting. Poole concluded that Tropico 2's theme is "barely a skin-deep covering on a sim that could just as easily have been made about the ACME Widget Factory."