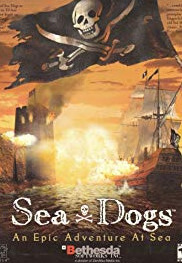 Sea Dogs (Корсары) is a 2000 Russian role-playing video game for Microsoft Windows, developed by Akella and published by Bethesda Softworks. In it, the player is the captain of a ship and can serve as a privateer to a European power, or as a pirate. The game uses a custom 3D game engine and includes gameplay similar to Sid Meier's Pirates!, while also being a true inter-character dialog-centered RPG.

The sequel, Sea Dogs II, was remade into Pirates of the Caribbean, but largely unrelated to the plot elements of the eponymous film.

Akella later created Age of Pirates: Caribbean Tales, the sequel to Sea Dogs. The title was changed because Akella wanted to create a brand name that they could control, rather than their publisher. A new fan-based title from Akella's pirate series called Sea Dogs: Return Of The Legend is available only in Russia and the CIS.

The player's character, Nicolas, was raised by his mother since he was a child. The only memories left of his father are his departure on a ship, as well as a golden medallion he gave him. Nicolas grows, and as his father did before, goes to sea to seek adventures. Soon, he is captured by the Spanish, but manages to escape with a small ship and a crew. He arrives at the central British colony, where he has to start a new life.

Since the game is nonlinear, the player may work for any of the three nations, as well as start a pirate's career. Searching for his father is always possible, but in order to succeed, the player will need to change his ship's flags a number of times. This quest will reveal the secrets of the main character's father's life story and his death, as well as his legacy.

Sea Dogs received "average" reviews according to the review aggregation website Metacritic. IGN was impressed with it, calling it "one booty call you won't want to miss". GameSpot was also positive about the game, saying it's "an adventure that can be enthralling despite its many problems".