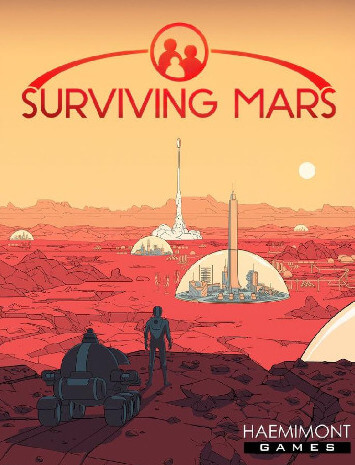 Surviving Mars is a city building simulation video game developed by the Bulgarian studio Haemimont Games and published by Paradox Interactive. It was released on Microsoft Windows, macOS, Linux, PlayStation 4 and Xbox One on March 15, 2018. The player serves as an overseer who must build a colony on Mars and ensure the survival of the colonists.

Surviving Mars is a city builder simulation game which takes place on Mars and is modeled after real martian data. In Surviving Mars, the player is in charge of manufacturing resources, constructing Domes and other buildings, and managing the citizens of the colony on Mars. Oxygen, water, shelter and food are priorities that players need to be constantly aware of. The game also has story lines called mysteries, which add various events to the colony, including plagues, war, rival corporations, AI revolt, aliens, and others. Landing sites have various amounts of resource deposits, such as concrete and rare metals, which can be exported back to Earth for funds. Landing sites also have various natural disasters like meteor storms and cold waves to increase difficulty.

Haemimont Games, the developer of the Tropico series, led the game's development. The team studied science and challenges real-life scientists consider when thinking about colonizing Mars, then turned them into gameplay elements. The game's aesthetics were inspired by The Jetsons and Futurama. Describing the game as a "hardcore survival city-builder", publisher Paradox Interactive announced the game in May 2017. The game was released for Windows, macOS, PlayStation 4 and Xbox One on March 15, 2018 with mod support. Two DLCs, titled Green Planet and Space Race, were released by Haeminont. Another Paradox's city builder, Cities: Skylines received a free DLC based on Surviving Mars.

The game received generally favorable reviews according to review aggregator Metacritic, scoring 80% on PC Gamer, and 78/100 on IGN.