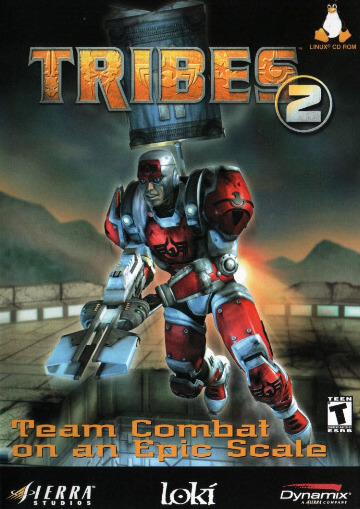 Tribes 2 is a first-person shooter multiplayer video game developed by Dynamix and published by Sierra On-Line in 2001 as a sequel to Starsiege: Tribes.

Set in the year 3941 of the fictional Earthsiege universe, Tribes 2 allows the user to play as a soldier in one of several factions (referred to in the game as tribes), namely the Children of the Phoenix, the Blood Eagle, the Diamond Sword, and the Starwolf. Players can also choose to play a rebelling human-created soldier/worker race called the BioDerms. None of the factions differ from each other in strengths or weaknesses, but each has a distinctive look and background story.

Tribes 2 is a multiplayer online game, designed for Internet or LAN play with up to 128 players (64 vs 64) or bots per match, although a small single-player tutorial mode is included. The game may be played from both first- and third-person perspectives. Each match takes place on an Earthsiege-themed map. The Tribes 2 engine, an early version of the Torque Game Engine, is capable of both indoor and outdoor maps, with expansive play areas. Player movement about the map may be on foot, using a jet pack, or in various ground and airborne vehicles as pilot, co-pilot, or passenger.

Each match is played according to one of a number of possible game modes, which dictate the rules of the match. These modes include Capture the Flag, deathmatch, Rabbit, Arena, Hunters, Duel-MOD, Siege, Gauntlet, and Bounty. Players are free to choose their own role, and may deploy various items of weaponry, vehicles, and emplacements. Many of these items can be left unattended to operate automatically, or control may be assumed by players. Each player may also choose from three armor types (which trade off various abilities, e.g. weak but fast, strong but slow, or median), and a weapon and equipment loadout, which may be reconfigured at any time during a match.

The large variety of equipment and deployable items results in many opportunities for creative play and tactics, from pure combat to stealth. Tribes 2 gameplay makes extensive use of jet pack-powered flight, which adds a notable vertical element to combat, and a skiing action to slide down slopes. As such, playing style varies dramatically from player to player, and from moment to moment, but Tribes 2 gameplay may be generalized as being fast-paced three-dimensional combat over a wide playing area. Player vs player combat is a central element of Tribes 2 gameplay, even in team-based modes.

Tribes 2 was developed by Dynamix as a sequel to Starsiege: Tribes. Mötley Crüe recorded a song for the game that was never released with the game.

On November 2, 2008, Sierra/Vivendi disabled the authentication servers required for its online multiplayer and dropped all official support for the Tribes franchise.

The Torque 3D game engine, on which Tribes 2 is built, was released by GarageGames under the MIT license on September 20, 2012. The Tribes 2 source code beside the Torque engine was not made available.

On November 20, 2002, Sierra released an update for Tribes 2. This update contained two new game types, new maps and updates to address several issues. Sierra, which was then part of Vivendi Universal Games, licensed the franchise to Irrational Games for a third installment; Tribes: Vengeance was released in October 2004.

In an effort to increase interest in the upcoming sequel, Sierra released both the original Starsiege: Tribes and Tribes 2 as freeware download on May 4, 2004.

In 2015, the game was released as freeware by Hi-Rez Studios.

Tribes 2 was commercially successful. Its sales had surpassed 200,000 copies and were steadily rising by the time of Dynamix's closure in November 2001, according to the company's Dave Georgeson. By August 2006, the game's sales had reached 280,000 copies in the United States alone, accounting for $9.2 million in revenue. This led Edge to declare it the country's 70th best-selling computer game released between January 2000 and August 2006. Combined sales of all Tribes computer games released between those dates, including Tribes 2, had reached 480,000 units in the United States by August 2006.

Heroes of Might and Magic V: Tribes of the East
hit
upd
new