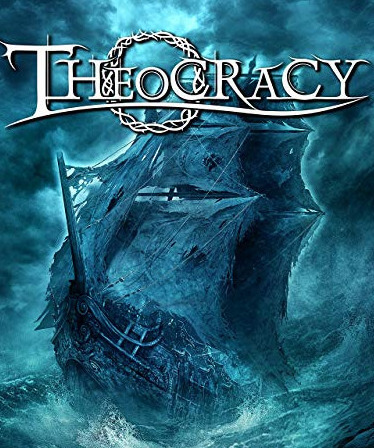 Theocracy is a real-time strategy game for the PC developed by Philos Laboratories and published by Ubi Soft in 2000. The game takes place in Mexico and Central America in the 15th century. The player controls a tribe in this region, and has 100 years to prepare for a Spanish invasion by expanding their territory across the Central American map, by conquest, or by allying and trading with other tribes.

In Theocracy, the player is the leader of the Atlan tribe (a fictional tribe), who has escaped from oppression under the Axocopans, and now must improve his/her tribe in order to survive in Central America. As the player's empire's borders expands, the player is able to conduct diplomacy with other tribes.

The game also allows players to play through several "Chronicles", a set of objective-based missions detailing supposed heroes of Aztec history. These mostly serve for tutorial purposes rather than being a serious part of the game however.

There are two modes of playing: province view, and realm view. In province view, the player view a particular province under their control/attack. Here they assign tasks to their persons, however time stands still here, and the player must go to realm view for time to move and his/her actions to take effect. There is a time-scale in realm view, along with a hand-drawn map of Central America, showing all the province borders, and using colour-code to show which of the eight factions controls it. The player's tribe is represented by the colour blue, while other tribes are red, yellow, green, purple and cobalt. Provinces under control from a random tribe with no possible relations to others are paper-coloured, and provinces controlled by the Spanish (once the Spanish arrive to invade) are grey. Each tribe has a unique 'personality' dictated by its AI; the red tribe the Izhuacans for example are an 'aggressive and warlike theocracy' and will generally be the first tribe to make an aggressive move in the game. The green tribe, the Huaputecs, are more peaceful and will never attack the player unless the player has already initiated hostilities. Tribes also have varying military tactics and units, the Yellow Tribe has an army consisting of almost entirely sword units supported by spearmen, jaguars and nature priests, while the Cyan tribe, the Teotitlans, have enormous crossbow units known as Wonderbows and soul priests supporting their warriors.

Players can also build Aztec-style pyramids to harness the power of magic from the five spheres of Magic: Sun, Star, Moon, Nature and Soul. The amount of magic available to the player is limited and measured in "Mana", Mana is used by Priests to cast spells, this Mana can be recharged by performing sacrifices at the Pyramids where priests are trained, the amount of Mana per unit depends on the Unit type. Each sphere of magic has different spells available with a vague focus on a specific type. Sun Priests specialise in attack spells, Moon in defensive ones, Nature Priests in Healing, Star Priests in 'debuff' or distraction and while Soul Priests are equally skilled in all fields.

Each region can be closely managed in the province view. Here activities can be undertaken such as construction, training and allocation of slaves.

The majority of the population of each realm is made up of slaves, basic worker units who can undertake any task except fight and transport resources between realms. There are a certain number of new slaves born each year depending on the level of health in the province, how much food the province has and what the current population of the province is.

As a bare minimum, each province must produce enough food to feed the entire population of the realm. There are two types of food, corn and meat. Corn is produced from small and large farms, and is produced faster and in greater quantity than meat, and is also required to feed llamas. Meat, while taking longer to produce, requires less slaves and is more nutritious than corn, meaning it can feed more people than the same amount of corn. It is therefore more economic to produce meat in a province than corn. Meat is also required to feed tamed jaguars.

There are a number of different resources that can be used in different ways. The most basic are meat and corn, used to feed people and tamed animals. Next is wood, which every building uses in construction, and is also used to create Wonderbows (similar to ballistas). Also used in construction is stone, which is used to build more advanced buildings. Finally, there is Gold, Jade, and Jewels. Jewels are used as a currency, and to decorate the most advanced buildings. It is made out of Jade and Gold. Either one can be used to create jewels separately, but used together they produce a much greater quantity than when used separately. Corn is produced from small and large farms, meat from ranches (pig farms) and fishing huts. Wood is produced from lumberyards and stone, gold and jade are mined from quarries. Jewels are produced in a workshop from gold and/or jade. There is also mana, however it functions differently from the other resources in that it is used to cast spells, can be accessed anywhere, and is generated from temples in a small continuous trickle. Sacrificing slaves will generate much more and faster, but slaves are the only means of production so they must be sacrificed carefully so as not to ruin the economy of a region. There is a different stockpile of mana for each sphere of magic. Note: resources are stored in stockpiles in each region, thus resources for one realm can be used anywhere in that region no matter where they are stored, but must be manually transported to another region in order to be used there. The exceptions are jewels and mana.