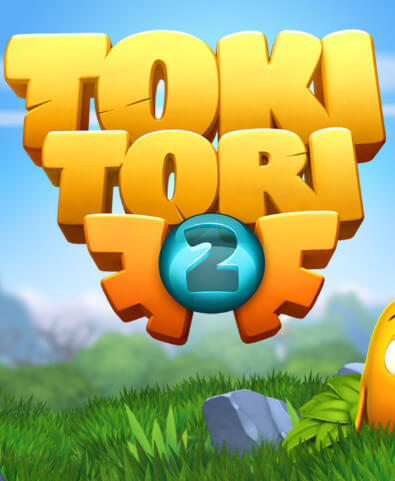 Toki Tori 2 is a puzzle platform game, developed by Dutch video game development company Two Tribes. It is the sequel to the 2001 game Toki Tori. The game was originally announced in December 2011 with an intended release for Spring 2012 for Steam and iOS devices (and was later announced as a Wii U game), but the game was pushed back due to longer than expected development times. The game was released on April 4, 2013 for Wii U and on July 11, 2013 on Steam for Windows and for Mac OS X.

The gameplay in Toki Tori 2 is very different compared to its predecessor, the main difference being the absence of items for Toki Tori to use. These are replaced by two skills that Toki Tori has during the game that are used to manipulate the environment and the creatures within it, the first one being Whistle which generally causes creatures to move closer to Toki Tori as well as being used to whistle songs that perform various actions. The other ability available to Toki Tori is Stomp. Stomp generally scares creatures into moving away from Toki Tori as well as breaking some parts of the environment. There are also other elements that make up the game, for example if Toki Tori walks into water his feathers will become wet which can then be used for other tasks such as walking through cut grass while wet will cause it to grow so it can be used.The game also features various features that are new to the series, one of these features being the Tokidex. The Tokidex is one of the collectables in the game, as the game is played the player can use a song to bring up the camera which is controlled via the Wii U controller (or through the keyboard on the computer version). This camera is then used to take pictures of the creatures that appear in the world, the player is rewarded for collecting pictures of every creature in the game.

Before the game was announced it was hinted at numerous times by Two Tribes, the main example of this was a QR Code that could be found in the Windows/Mac port of EDGE which led to a countdown timer, when this countdown timer ended it changed to show a picture of a buried Toki Tori skeleton with a hole in the ground next to it. After the countdown ended, Toki Tori 2 was announced shortly after.

When the game was announced was when work was started on the game and at this point Two Tribes invited fans to become part of the development process by providing access to an alpha build of the game through Steam, this started off as a concept art viewer but as new features for the game were created they were implemented into the alpha, such as the level editor. Two Tribes also implemented an input recording function in the alpha which allowed them to ask players to complete tasks or levels in the alpha and then send their recording to Two Tribes for it to be used to improve the game as well as fix bugs.

The level editor for the Wii U was cancelled due to lower than anticipated sales and various technical difficulties.

On October 22, 2013, Two Tribes announced that the planned iOS version was cancelled.

On February 16, 2018, Toki Tori 2+ appeared for pre-order on the Nintendo Switch eShop without prior announcements, and officially launching for the platform seven days later in North America, Europe, and Australia. Two Tribes claims it is the definite version of the game, and comes with HD Rumble and video capture support. The pre-order came with an introductory price.

The Sims 4: Get Together
hit
upd
new