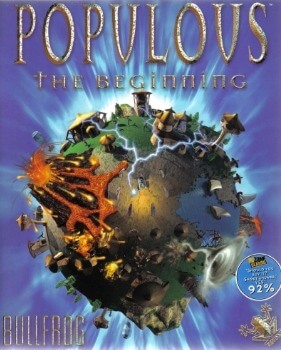 Populous: The Beginning is a real-time strategy video game and is the third entry in the Populous video game series, developed by Bullfrog Productions. The game was released in 1998 on Microsoft Windows, and in 1999 for the PlayStation. Unlike earlier games in the series, which cast the player in the role of a god influencing loyal followers, The Beginning took a radical departure and placed the player in the role of a shaman, who directly leads her tribe against opponents. Throughout the twenty-five missions of the campaign, the player leads their tribe across a solar system, dominating enemy tribes and tapping new sources of magic, with the ultimate goal of the shaman attaining godhood herself.

Populous: The Beginning was the first entry in the series to use 3D computer graphics; Bullfrog waited four years after Populous II: Trials of the Olympian Gods so that the graphics technology could catch up to their vision for a new and different game in the series. The developers considered the addition of terrain deformation and manipulation, combined with "smart" villagers who automatically attended to tasks, to add an entirely new dimension to the series. The game's original title was Populous: The Third Coming before being changed prior to the beta release.

Populous: The Beginning plays very differently from earlier titles and received mixed reviews. Critics noted the excellent graphics, while complaints were directed at the artificial intelligence and the indecision in game design between being a real time strategy title and a god game. GamePro's Peter Olafson wrote that Populous: The Beginning was a good game but was "without a quintessential quality that defined Populous."

In Populous: The Beginning, the player controls a female shaman and the tribe which follows her. Unlike the previous games in the series, The Beginning allows the player to directly control the action of followers, by ordering them to build structures or attack enemies. In the campaign, the player must fight the opposing Dakini, Chumara and Matak tribes for dominion over the solar system. Enemy tribes also have shamans, and on later levels all inhabit the same world. While the objective is almost always to eliminate all of the members of the other tribes, there are often specific ways this can be achieved. Sometimes the player must use magic spells gained from worship at special monuments such as stone heads or "Vaults of Knowledge"; in other cases, the player only needs to overwhelm the enemies with superior numbers. The game has no formal resource management; new units are created automatically at houses, and training new troops costs nothing except mana. Only wood from trees is required to build new structures.

The game is played from a third-person perspective with the camera at a variable height and capable of rotating 360°, enabling the player to quickly move across the planet's terrain. While the terrain's topology is a torus, the map is locally projected onto a sphere to give the illusion of a planet. On maps where there is no fog of war, players can see what opponents are doing at any time. Extensive support for 3D acceleration enables the player to view the game in 16-bit or 32-bit colour. The landscape and real-time structure building and follower movement are also shown.

The player commands different types of followers, each of which has advantages and disadvantages in combat. The most basic unit is the Brave, which builds huts, towers, and military buildings. Braves are trained to become other units: tough melee Warriors; weak, long-range, Firewarriors; Preachers, who convert enemy units and prevent enemy preachers from converting friendly troops; and Spies, who perform espionage functions. Shamans are physically weaker than warriors, but can cast powerful spells and can be reincarnated if killed. Some spells will disappear after use. Other spells can slowly be replenished for continued use; the rate of spell regeneration depends upon the player's number of followers. Examples of spells include "Landbridge", which raises the sea floor to create bridges across the sea; "Swarm", which sends a horde of insects to sow confusion in enemy ranks; and "Tornado", which creates a cyclone to destroy buildings. There are twenty-six spells in total, which are slowly learned throughout the campaign.