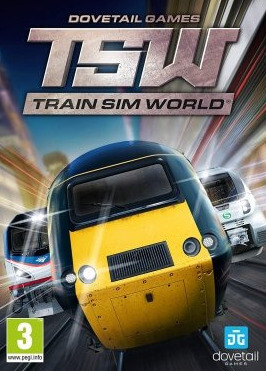 Train Sim World (abbreviated to TSW) is a train simulation game developed by Dovetail Games. It is the successor to Train Simulator and was released on 24 July 2018. For the first time, Train Sim World allows players to walk around the game world in first-person mode. This mode is utilised in tutorials, scenarios and services where the first-person mode is required to complete tasks such as refuelling or changing switches.

During beta release, the game was originally called Train Sim World: CSX Heavy Haul, which consisted of one playable route, Sand Patch Grade, based in the United States.

The second version was Founders Edition, which was available on Xbox One, containing Great Western Express.

On 12 December 2019, Dovetail released an East Coastway add-on. In addition to the Brighton to Eastbourne route, there is a branch route between Lewes and Seaford. The release includes the BR Class 377/4.

The PlayStation 4 and Xbox One versions of Train Sim World were released to "mixed or average" reviews, according to the review aggregator Metacritic.