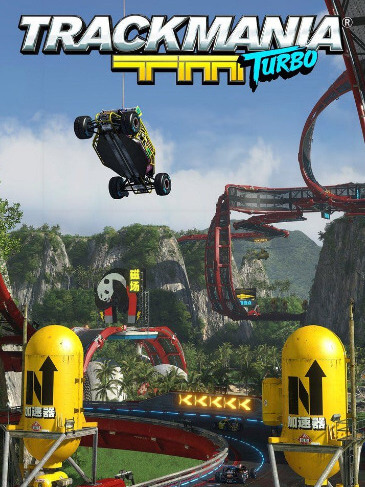 TrackMania Turbo is a racing video game developed by Nadeo and published by Ubisoft. Announced at E3 2015, the title is the first TrackMania game that is to be released on consoles since 2009's TrackMania Wii. The game features support for virtual reality. The game was originally set to be released on 3 November 2015, but was delayed to 22 March 2016 to give additional time to the development team to further polish the game.

TrackMania: Turbo features gameplay akin to that of previous games in the series. The player can race on over 200 different tracks, across four different locations, namely Rollercoaster Lagoon, International Stadium, Canyon Grand Drift, and Valley Down & Dirty. Similar to previous games, the game moves at a very high pace with a high focus on stunts. The game's developer said that "They wanted Trackmania Turbo to be an arcade game"

Various modes are set to appear in the game, including a campaign and a mode called Double Driver, which is a cooperative multiplayer mode, in which two players are controlling the same car. TrackMania Turbo will also have a split screen multiplayer mode for up to 4 players which makes it the first racing game with such gameplay for the consoles PlayStation 4 and Xbox One and PC in 2016. and Arcade in 2019.

The track editor from previous games also returns, which allows players to create own tracks and share to other players. A new addition to the track editor, is its ability to generate random tracks. A new feature introduced to the franchise is Systemic music, which ties the soundscape to the gameplay, which dynamically intensifies, heightens or lessens the music to fit with the gameplay.