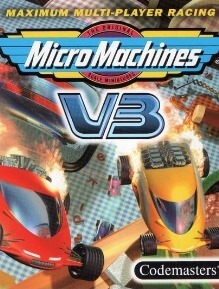 A Sega Saturn version of the game was demonstrated at the 1996 Electronic Entertainment Expo, at which time Codemasters stated that they were hoping to release the PlayStation and Saturn versions simultaneously. However, the Saturn version was never released. An N64 port of Micro Machines V3 was released in 1999 entitled Micro Machines 64 Turbo. This port can let 8 people play simultaneously while using a Pad Share, where one person uses one side of the controller, steering with the Directional pad, while the other player uses the four C-buttons. The vehicles accelerate automatically in these modes. An official micro machines vehicle was packaged with each copy.

Next Generation reviewed the PlayStation version of the game, rating it four stars out of five, and stated that "Micro Machines V3 may not be the next Formula 1, but it is brilliant in its own right. One of the truly great multiplayer PlayStation games."

Micro Machines V3 received positive reviews. Aggregating review websites GameRankings gave the Game Boy Color version 85.00% based on 4 reviews, the PlayStation version 78.04% based on 13 reviews and the Nintendo 64 version 73.31% based on 8 reviews.

In the Hunt
hit
upd
new