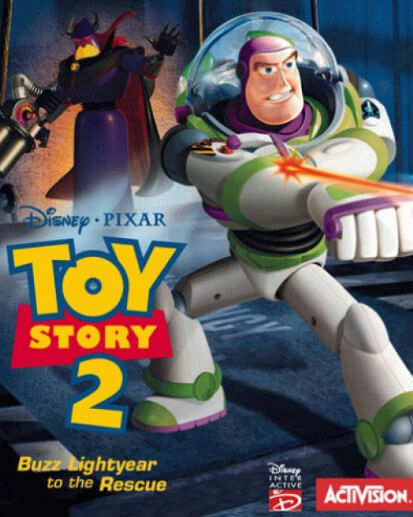 Toy Story 2: Buzz Lightyear to the Rescue! is a platform game based on Pixar's 1999 computer animated film Toy Story 2. It is the sequel to the first Toy Story video game. It was released for the Nintendo 64, PlayStation, Microsoft Windows, and Macintosh in late 1999, while a Dreamcast version followed in 2000. The computer versions were released under the title Disney/Pixar's Action Game, Toy Story 2. A different version, a side-scrolling platform game titled Toy Story 2, was also released for the Game Boy Color in 1999.

The game's plot is relative to the Toy Story 2 film, and begins at Andy's house as Al McWhiggin steals Woody from the family's yard sale. Buzz Lightyear, Hamm, Rex, Slinky and Mr. Potato Head venture out to find and rescue Woody. After leaving Andy's house, the toys enter the neighborhood in which Andy lives, then proceed to Al's Toy Barn, the penthouse where Al lives and finally the airport terminal and tarmac where the movie ends. At the end of the game, Buzz has a final battle with Stinky Pete (a.k.a. the Prospector) and two of his in-game henchmen. Contrary to the movie, defeating Stinky Pete is the end of the game.

The home console and computer version puts the player in control of Buzz Lightyear as he goes across fifteen levels (consisting of ten main levels and five boss levels) based on and inspired by locations from the film in order to rescue Woody. Buzz can attack enemies with a wrist laser, which can be charged up for additional power, and can also be aimed through a first-person viewpoint. Buzz also has a spin attack, which can be charged up into a continuous spin. Buzz is also able to extend his wings to perform a double jump, and can perform a foot stomp to activate switches. The player can pick up a laser power-up that gives Buzz a limited supply of powered up laser shots, as well as extra lives and health-replenishing batteries.

The main aim of the game is to collect Pizza Planet tokens which are located throughout stages. Each level has 5 Pizza Planet tokens, which are each collected by completing different objectives, such as fighting a mini-boss, solving a puzzle, completing a timed challenge or winning a race against another character, or helping a character find five of a certain object which are hidden throughout a level. Each level also has a number of coins placed throughout it, 50 of which can be collected and given to Hamm for a token. Certain objectives require the use of a special power-up that must first be unlocked in a certain level by retrieving one of Mr. Potato Head's missing body parts. Power-ups include a barrier that protects Buzz from damage, rocket boots that launch him at high speeds, a disk launcher that homes in on enemies, a grappling hook for climbing up high ledges, and hover boots for floating up to high places. While only one Pizza Planet token is needed to clear a level, some levels require a certain number of tokens to unlock. With the exception of the Nintendo 64 version, progressing through each level unlocks FMV clips of scenes taken from the film. The Nintendo 64 version instead features screenshots from the film accompanied by text, shown in between levels. This is due to storage limitations of the Nintendo 64 cartridge.

Critics for Game Informer reviewed the PlayStation version and praised the FMV cutscenes and levels, but criticism was directed at the repetitive gameplay. Game Informer praised the "enjoyable" gameplay of the Nintendo 64 version, but also considered it to be monotonous and too easy, while criticizing the lack of cutscenes. AllGame's Brett Alan Weiss praised the PlayStation version for the camera, controls, level design, and the cutscenes, and stated that the character voices, "though redundant, are a plus." However, he considered the game too easy for hardcore gamers. Glenn Wigmore of AllGame praised the Nintendo 64 version for its graphics, sound effects, and control, but was critical of the game's music, considering it to be repetitive.