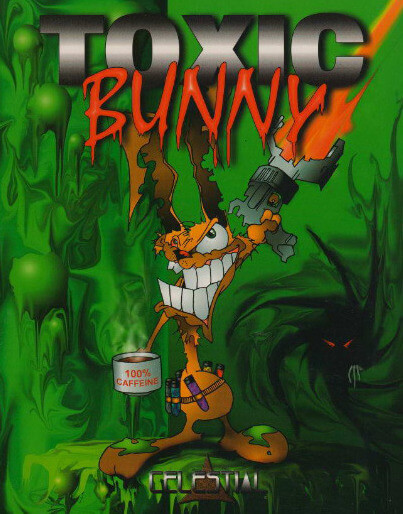 Toxic Bunny is a side-scrolling action computer game for MS-DOS computers released in 1996 by Celestial Games http://www.celestial-games.com/. The premise of the game is that a bunny named Toxic, a coffee guzzling, gun slinging maniac who is having a really bad day. The game covers four large levels in which Toxic hunts the person (or animal) responsible for interrupting his coffee break, brainwashing all his friends, and covering the planet with a decaffeinated goo. Within the game you can use any number of incredibly large weapons including a Nitric Hamster Launcher, while squashing aliens with rusty nautical equipment.

The game has been called a psychedelic parody of Epic Games character, Jazz Jackrabbit, due to similar game play and the fact that the protagonist is also a rabbit.