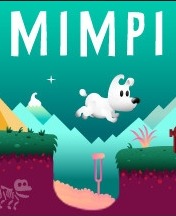 Mimpi is a video game developed by Czech company Silicon Jelly. It is a mix of an adventure puzzle and a platform game.

The sequel Mimpi Dreams was released in 2015.

The game was announced in January 2013. The development started approximately in October 2012.

Most of the game was developed by designer Matěj Moravec. Programmers started their work when he finished the first four levels. The music was done by company Sype Studios. In the course of development the game went through many changes. For example, it was longer and easier than planned.

Mimpi is played as a side-scrolling platformer. The player controls a dog, Mimpi, with directional arrows. The player can also interact with surroundings by tapping, swiping, and dragging on them. There are plenty of puzzles that the player has to get through. The game is set in 8 different worlds that differ not only by visuals but also by gameplay. In a sea level, for example, your character is in a bubble and has to avoid touching anything. In the course of the game you can find bones. They are used to unlock various illustrations.

The story is told by animations without written or voiced dialogues.

The game follows story of a little dog, Mimpi, whose owner disappears when he enjoys his nap during a day. He sets up to find him. He meets strange creatures on his way and some of them are hostile. He gets through multiple environments and overcomes multiple dangers. In the end he finds out that his real task is not to find his master but to help himself. When he went for a walk with his master they met some woman and his master didn't pay any attention. Mimpi ate a Chocolate Bunny. Because of it Mimpi got a fever and it is revealed everything happening is just a toxic psychosis. In the end Mimpi gets to his own stomach and defeats the Bunny. Mimpi then wakes up on his master's lap.

Mimpi Hidden Objects is a hidden objects game. The player there goes through portraits of scenes that depict the world of Mimpi. There he has to search for objects that are randomly generated. There are seven scenes known from the original game.

The last spin-off is Mimpi Signal. The player has to find the right wave by using three different controls to manipulate wavelength, speed or amplitude of the wave.

Mimpi received generally positive reviews from critics upon its release. It was praised for its visuals gameplay and music. On the other hand, it was criticised for its controls and difficulty of some puzzles.