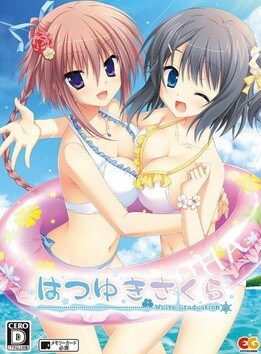 Hatsuyuki Sakura (Japanese: はつゆきさくら), also known as Hatsuyuki Sakura: White Graduation, is a Japanese adult visual novel developed and published by Saga Planets under Visual Art's. It was released on February 24, 2012. A manga adaptation was serialized on Comp Ace. The first volume was released on May 25, 2012; volume 2 was released on October 25, 2012. The manga was written and illustrated by Daisuke Takino. An PlayStation Vita port has been released on March 23, 2017 by Entergram, Inc.

Hatsuyuki Kawano is a third-year student, one of the rare delinquents at his school. He reluctantly shows up in order to fulfill his graduation requirements. As the first snow of the year falls in December, Hatsuyuki encounters a beautiful girl wearing a white dress in the old town. She is wandering the streets in search of a rabbit. A few days later, the girl in the dress, Sakura, transfers into his school to take Hatsuyuki along towards the last winter.