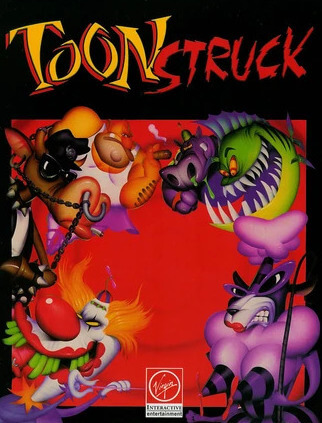 Toonstruck is an adventure game released in 1996 for DOS. The game features hand-drawn imagery and animated characters, but the protagonist Drew Blanc (played and voiced by actor Christopher Lloyd) is represented as a video-captured live action character interacting with the cartoon world around him. Toonstruck also features scan-line compressed FMV, including several animated sequences produced by Nelvana and Rainbow Animation, and was also one of the first video games to include stock music from APM Music, notably the classic "Spooky Scherzo" by Sam Fonteyn and "Lonely Hearts Club A" by David Bell.

Toonstruck is a point-and-click adventure game where the player controls Christopher Lloyd's digitized likeness. The game uses a "Bottomless Bag" as an inventory icon, and the mouse pointer, represented by an animated white-gloved hand, is context-sensitive, changing its icon depending on what it is rolled over.

Drew Blanc is a cartoon animator and the original creator of the Fluffy Fluffy Bun Bun Show. The show has been an unprecedented ten year success for his company, but in reality the many cute talking rabbits that star in the show sicken him. His self-revered creation, Flux Wildly, a wise-talking and sarcastic small purple character, has been denied the chance of starring in his own show. Drew's boss, Sam Schmaltz (played by Ben Stein), sets him the task of designing more bunnies to co-star in the Fluffy Fluffy Bun Bun Show by the next morning. However, the depressed animator soon nods off, suffering from acute artist's block. He wakes early the next morning to inexplicably find his television switched on, announcing the Fluffy Fluffy Bun Bun Show. Suddenly, Drew is mysteriously drawn into the television screen and transported to an idyllic two-dimensional cartoon world populated by his own creations, among many other cartoon characters. He soon befriends Flux Wildly (Dan Castellaneta), and discovers that this fictional paradise is being ravaged by a ruthless new character named Count Nefarious (Tim Curry) with a devastating weapon of evil, a flying machine equipped with a ray beam that mutates the pleasant, childish landscape and its inhabitants into dark, twisted and mean counterpart versions of themselves.

He is tasked with hunting down and stopping this madman, thereby restoring peace and harmony to the land, in return for safe passage back to three-dimensional reality. In the end, Drew manages to defeat Nefarious and returns to the real world, thinking his adventure was just a dream. He presents his new idea to Sam, The Flux & Fluffy Show, only for it to get shot down. As Drew resigns himself to his soulless job, Flux calls him through a communicator he gave him and tells him that the toon world is still in danger and Drew happily teleports away.

Simon Jeffery of Virgin Interactive said that Toonstruck's global sales surpassed 150,000 units by 1998. However, it "was delivered almost two years late and at a final development cost of well over $8 million", according to Next Generation. The game underperformed in sales and became a major commercial flop, a problem that executive producer David Bishop attributed to poor marketing and "the worst packaging I've ever seen".

Ron Dulin of GameSpot said Toonstruck was "overly-hyped for both its technical prowess and ingenious premise. ... the animation, while admirable, isn't mind-blowing, and the story is mildly amusing at best. But what's great about Toonstruck is that neither of these drawbacks matters in the slightest; the designers have made a great game by creating an experience that is entertaining and challenging but doesn't become too frustrating or too easy." He elaborated that the game is consistently clear about what the player needs to do, and the puzzles deal solely with how to go about doing it. A review in Next Generation focused instead on the script, and assessed that "The dialog, slapstick humor, and relentless 'comedy' situations are tired and mostly ripped off from past and present cartoon creations. You've seen most of these jokes before, and done better 40 years ago." Major Mike of GamePro likewise found the dialogue tedious and unfunny, but praised every other aspect of the game, particularly the puzzle interface, whimsical music, and integration of live action video with fluid cartoon animation. He summarized, "Although it lags at times, it contains an excellent blend of puzzle-solving and cartoon animation."

Despite receiving mostly positive reviews from game critics, the game sold poorly. Destructoid blamed this on the decision to cut the length of the game in half as well as poor marketing by Virgin Interactive.

Toonstruck was named the 37th best computer game ever by PC Gamer UK in 1997. The game was a finalist for Computer Gaming World's 1996 "Adventure Game of the Year" award, which ultimately went to The Pandora Directive. In 2011, Adventure Gamers named Toonstruck the 93rd-best adventure game ever released.