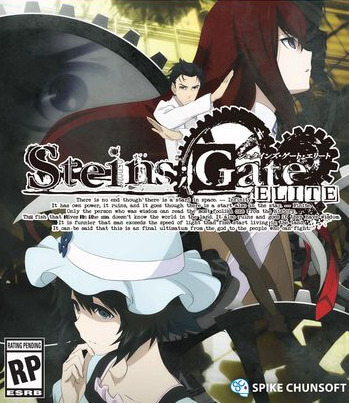 Steins;Gate Elite is a science fiction visual novel and interactive movie game, part of the Science Adventure series. It was developed by 5pb. for PlayStation 4, PlayStation Vita, Nintendo Switch, Microsoft Windows and iOS, and was released in 2018 in Japan and in 2019 internationally. It is an updated, fully animated version of the 2009 game Steins;Gate, using footage from the anime adaptation of the original game along with newly produced animation by White Fox.

The game was created from the desire of its planner, Chiyomaru Shikura, to evolve the visual novel genre: he was influenced by the fully animated game series Yarudora, but as high development costs and a long production time would have prevented a full-length animated visual novel, it was decided to create a game that reused already existing animation. The game has been well-received by critics.

Steins;Gate Elite is a science fiction visual novel and interactive movie game, an updated version of the 2009 game Steins;Gate. Unlike previous games in the Science Adventure series, it is fully animated, using all the footage from the Steins;Gate anime series along with newly produced animation for story routes not adapted in the anime; the animation is played together with the script and voiced dialogue from the original game. The player reads the on-screen text and presses a button to advance the animation and text, and thereby progresses through the story. At certain points, the player makes choices which cause the story to branch into different directions, leading to different endings.

Steins;Gate Elite was developed by 5pb., and was planned by Chiyomaru Shikura and produced by Tatsuya Matsubara. The new animation was produced by White Fox, the studio that produced the Steins;Gate anime series. Shikura had for a long time thought about how to evolve the visual novel genre, as he felt it had been largely stagnant. He was influenced by the Yarudora series of games, which are fully animated and voice acted, liking how fully animated visual novels would have the advantage of both containing prose describing characters' internal feelings, and showing movements and expressions that are not as easily conveyed through character sprites and prose only. He did however note that making a full-length visual novel in that style would be difficult due to production costs and how long the development would take. Realizing that a project like it would have to reuse old animation to be feasible, it was decided to create a game using material from the anime adaptation of Steins;Gate, as it already contained a large portion of the story from the original game.

There were still difficulties involved in incorporating the anime footage in Steins;Gate Elite: In a typical visual novel, each character only talks and acts when the player pushes a button, while multiple characters can move and talk at the same time in an anime. This resulted in the anime footage having to be deconstructed, with each character's movements in a scene separated into its own individually playable animations. Because the player character uses his cell phone at several points in the game, they also had to add new animations of him taking it out. Other difficulties involved discrepancies between the original game and the anime adaptation, such as characters being in different locations for certain scenes in the anime compared to the original game; taking care of these situations alone took six months. The user interface was also redesigned to be subtle and blend in with the animation.

Reviewing the game's Tokyo Game Show demo, Famitsu wrote that they thought the game felt fresh despite how they had already played the original game and watched the anime. Because of the added animations, they thought the game gave a greater feeling of urgency than the original Steins;Gate, and described it as feeling like they were moving the animation due to how it waits for the player to press a button before moving. Dengeki PlayStation were initially negative towards the idea of remaking Steins;Gate using material from the anime, but were positively surprised when they played the demo. IGN was positive to the demo, and thought the anime footage prevented the monotony one can feel when playing visual novels with static background images and character sprites.

The PlayStation 4, Nintendo Switch and PlayStation Vita versions of the game were the second, fourth and twentieth best-selling physical video games in Japan during their debut week, selling a combined total of 30,442 copies. The PC version was among the best-selling new releases of the month on Steam.

Steins;Gate Elite was well-received by critics, according to the review aggregator Metacritic, and was the 7th best received new game of the first half of 2019. Famitsu enjoyed the combination of reading the visual novel script and watching the animation, and liked the newly produced animated sequences.