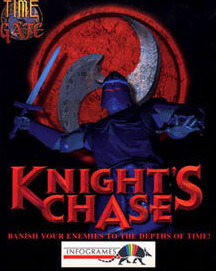 Time Gate: Knight's Chase (or just Knight's Chase) is a puzzle-solving game by Infogrames released 1996 for MS-DOS and Microsoft Windows.

Knight's Chase was the first game in a planned trilogy of Time Gate video games.

Maximum praised the game's mix of swordplay and puzzles, as well as the plot twists, but gave it an overall negative review due to its overt similarity to the Alone in the Dark series, commenting "The Alone in the Dark trilogy are undeniably great games, but after milking the genre dry surely a change of plan is necessary. Obviously not if Time gate sic is anything to go by, as it's more than just a tribute to the Edward Carnby adventures - it's practically identical." They also stated that the Gouraud-shaded characters look dated compared to texture-mapped characters, and scored the game three out of five stars. A reviewer for Next Generation instead complained of awkwardness resulting from the game's controls and limited number of camera angles, and criticized the developers for not including gamepad support. He further commented that though Alone in the Dark was a landmark game, Knight's Chase did not make enough improvement given the three years that had passed since then. He scored it two out of five stars.

Andy Butcher reviewed Time Gate for Arcane magazine, rating it a 7 out of 10 overall. Butcher comments that "polished though it is, Time Gate doesn't really offer anything new. If you're familiar with the Alone In The Dark series you won't be able to escape the feeling that you've seen all this before. Still, there's precious little to criticise, and it offers several hours of solid gaming."