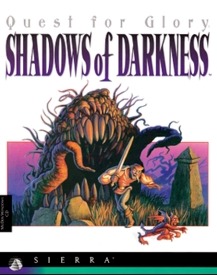 Quest for Glory: Shadows of Darkness is an adventure game/role-playing video game hybrid. It is the fourth installment of the Quest for Glory computer game series by Sierra On-Line. It was the first and only game of the series to drop the numerals from the title.

Shadow of Darkness follows directly on the events of Quest for Glory III: Wages of War. Drawn without warning from victory in Fricana, the Hero arrives without equipment or explanation in the middle of the hazardous Dark One Caves in the distant land of Mordavia, a world full of undead that is "a mix of Slavic folklore and Lovecraftian horror". Upon escaping from the closing cave mouth, he meets a mysterious young woman named Katrina who assists him again several times in his journey. The Hero helps the townspeople with their problems. He encounters several old foes, including the not-quite-dead Ad Avis and the ogress Baba Yaga, and makes several bizarre new allies. The Hero is ultimately coerced into assisting Ad Avis' Dark Master in collecting the Dark Rituals that will allow Avoozl the Dark One (an obvious Cthulhu pastiche, and most likely a reference to the Slavic deity Chernobog) to manifest in Mordavia's world. Naturally, the Hero escapes this control and thwarts their plan, destroying Ad Avis in the process. During the celebration of the Hero's somewhat pyrrhic victory, the wizard Erasmus appears, along with his familiar Fenrus, summoning the Hero to the land of Silmaria.

Initially, the game was released in December 1993 on nine 3.5" floppy diskettes (as were many other Sierra adventures at the time) to accommodate gamers who didn't have a CD-ROM drive. Pressure to adorn shelves before the holiday season marred the first release with bugs that frustrated the earliest players. Other factors were that the game was ambitious in scope and complex in design compared to other adventures, and Sierra's adventure game technology, the SCI engine, had been undergoing significant revisions during development. Sierra later shipped a version 1.1a patch that was completed on January 10th, 1994, free of charge, to customers who requested it. This game was among the first few published games shipped with known software bugs that the publisher planned to later rectify by providing a patch. Fortunately, the main release soon followed. Appearing in September 1994, this finalized CD version brought full recorded dialogue, a new intro cinematic, and fixed gameplay. The jewel box came with a game CD, manual, store catalogue, and legalities. The floppy version came with a smaller and less detailed manual.

As the floppy version had no device-entrusted copyright protection, the player was asked to make several verifications at the beginning of each game. The CD version only required the disc.

(0) Comments on "Quest for Glory: Shadows of Darkness Full Version"