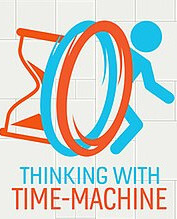 Thinking with Time Machine is a single-player mod for Portal 2 developed by Ruslan Rybka, also known as Stridemann, and released by SignHead Studio. It was initially released to Steam on April 18, 2014, for Microsoft Windows, OS X, and Linux systems, available freely to users who own Portal 2 on Steam.

Like in Portal, Thinking with Time Machine gives the player the Portal gun, and puts them in the same environments and with many of the same testing elements. However, the player now also has a device known as the "time machine". The device allows the player to record their movements, and summon a double who performs those motions.

Most of Portal 2's testing elements are included here, but there's a new instruction board showing new test ideas. For example, it shows that crouching down as a double will let you stand on it. If it stops crouching when you're on it, you will be pushed up a little and can jump higher.

Alice O'Connor of Rock, Paper, Shotgun said of Thinking with Time Machine "For those lacking in some of the social niceties, it’s perhaps the closest we’ll get to playing Portal 2 co-op.”