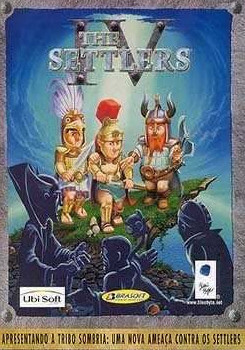 The Settlers IV (German: Die Siedler IV), released as The Settlers: Fourth Edition in North America, is a real-time strategy video game with city-building elements, developed by Blue Byte and published by Ubi Soft. Released in Germany for Microsoft Windows in February 2001, in the United Kingdom in March, and in North America in August, it is the fourth game in The Settlers series, following The Settlers (1993), The Settlers II (1996) and The Settlers III (1998). In August, Blue Byte released an expansion, The Settlers IV Mission CD, featuring new single-player campaign missions, new maps for both single-player and multiplayer modes, a random map generator and map editor, gameplay improvements, and bug fixes. In December, they released a second expansion, The Settlers IV: The Trojans and the Elixir of Power (German: Die Siedler IV: Die Trojaner und das Elixier der Macht), containing new single-player campaigns, additional single and multiplayer maps, improved graphics, and additional gameplay tweaks. In March 2002, The Settlers IV: Gold Edition was released, containing the original game and both expansions, plus fan-made maps for multiplayer mode, and two minigames. In November 2009, Gameloft ported the original game to iOS, under the title The Settlers. Although featuring updated graphics and utilising touch controls, the gameplay, game mechanics and storyline are identical to the original. In April 2010, The Settlers was released for webOS, specifically optimised for the Palm Pre. Gameloft later released HD versions for iPad, bada, Symbian and Android. In 2013, the Gold Edition was released on GOG.com. In 2018, the game was re-released as The Settlers IV: History Edition.

In the game's single-player campaign, the player controls three races (Romans, Vikings and Mayans) as they initially fight one another, before joining forces to combat the much greater threat posed to each of them by the exiled god Morbus, who has been banished to Earth after instigating a failed rebellion against the great god, HE. Unable to bear touching foliage, Morbus leads the mysterious Dark Tribe as he sets about attempting to erase all natural greenery from the planet's surface. The Trojans and the Elixir of Power takes place many centuries later, when the war against the Dark Tribe has faded from memory, and the three victorious civilisations have returned to fighting with one another. However, when Morbus once more proves a threat, attempting to permanently cure his allergy of greenery by creating a powerful elixir, it falls to the Trojans to unite the others, and stand against him and the Dark Tribe.

Acting on feedback from fans who had felt Settlers III was too focused on combat, the designers aimed for a return to the core supply and demand-based gameplay of the first two titles in the series. As a result, the game was designed to strike a balance between economic planning and military conquest. Although the basic gameplay remains relatively unchanged from Settlers III, some of the game mechanics have been altered. For example, for the first time in the series, the offensive strength of the player's military is tied to the economic value of their settlement; the player has access to each rank of soldier from the beginning of each mission, with the ability to select the rank of every soldier prior to recruitment; the game's single-player campaign focuses on a race that cannot be defeated solely by military means; and specialty units and squad leaders have been added to enhance the tactical aspects of combat, with warships also made available, allowing for combat at sea.

The Settlers IV received mixed reviews, with most critics feeling it was too similar to The Settlers III, and many opining that Blue Byte had failed to steer the gameplay away from an over-reliance on combat. Although the graphics and animations were generally praised, the AI, mission variety, and limited combat strategy were criticised, with reviews comparing the game unfavourably to titles such as Age of Empires II and Zeus: Master of Olympus. The handheld version received more positive reviews, and was lauded for replicating the original game on a portable device, and for successfully adapting the controls to a touchscreen. The most common criticism concerned the lack of free play and multiplayer modes.

The Settlers IV is a real-time strategy game with city-building elements, controlled via a point and click interface. The general gameplay and game mechanics are very similar to The Settlers III, and the primary goal on most maps is to build a settlement with a functioning economy, producing sufficient military and/or specialist units so as to conquer rival territories. To achieve this end, the player must engage in economic micromanagement, construct buildings, and generate resources.

The game can be played in one of two modes; single-player or multiplayer. In single-player mode, the player can play either campaign missions or individual non-campaign games ("Free Maps"). In campaign mode, the player must complete a series of missions, the goal of most of which is to defeat the computer controlled opponent or opponents by gaining possession of their territory, or, in the case of the Dark Tribe, by destroying their temple using gardeners. In the original release of the game, there were three separate campaigns of three missions each (one campaign each for the Romans, Vikings, and Mayans), and a fourth campaign of twelve missions in which the player controls all three races as they fight against the Dark Tribe. The Mission CD expansion added three additional campaigns of five missions for each race, plus three "Settlement" missions and three "Conflict" missions. The Trojans and the Elixir of Power expansion added three campaigns of four missions for each of the original three races, four Settlement missions, and a new campaign of twelve missions in which the player controls the Trojans against the Dark Tribe.

In Free Maps and multiplayer mode, which can be played via a LAN or online, the player chooses the map on which to play, and then refines the game in various ways, such as adjusting the number of computer controlled opponents, the amount of raw materials available at the start of the game, and/or the victory conditions. The player can also select the type of game to be played, choosing from "Conflict Mode" (each player/race competes against one another), "Ranking List" (players receive points at the end of the game for ranking on Blue Byte's online league table); "Cooperation Mode" (players combine forces to achieve a predetermined objective against computer controlled races), "Economic Mode" (the winner is the player to produce the most goods in at least four out of seven categories within a time limit), "Settlefest" (players compete on separate, but identical, single-player maps to be the first to reach a given objective), or "Free Settle Mode" (one player/race).

Whether playing single-player or multiplayer mode, each game begins the same way; the player has a small settlement, a set amount of raw materials and tools, and a predetermined number of settlers. The basic gameplay revolves around serfs (the titular "settlers"), who transport materials, tools and produce, and who populate and perform the requisite task of each building. As in The Settlers III, new settlers can only be acquired by the construction of residences.

At no point does the player directly control any normal settler - instead, general orders are issued (such as ordering the construction of a building), with the AI handling the delegation of orders to specific settlers. However, the player can control specialist settlers, of which there are four types; pioneers (extend the player's territory by digging at the border), thieves (scout enemy territory and steal resources), geologists (test mountainous ground for raw materials), and gardeners (reclaim terrain corrupted by the Dark Tribe). When playing a multiplayer game, the player also has access to a fifth specialist unit; the Saboteur, who can attack and destroy all enemy buildings, not just military installations.