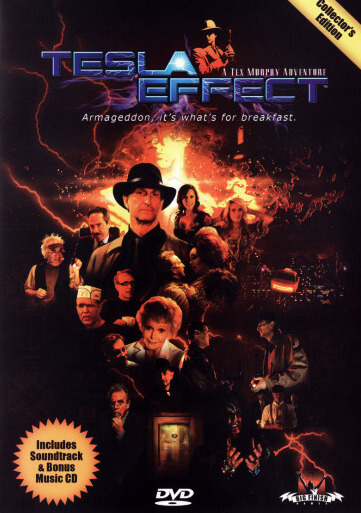 Tesla Effect: A Tex Murphy Adventure (developed under the working title Project Fedora) is the sixth game in the Tex Murphy series of detective adventure games, developed by Big Finish Games and published by Atlus. Like the previous three games, it tells much of its story through live-action full-motion video sequences, and features freely explorable 3D environments during gameplay.

Tesla Effect's gameplay has been described as very similar to Under a Killing Moon, The Pandora Directive, and Tex Murphy: Overseer. As in those titles, players navigate 3D environments in first-person, search for clues, and use inventory items. The game also includes logic puzzles and a branching conversation system for interviewing characters. Like The Pandora Directive, it features "narrative pathing" where player choices affect the story and ending.

Tesla Effect begins in 2050, seven years after Tex and his love interest, Chelsee Bando, were attacked at the end of Tex Murphy: Overseer. The story starts as Tex suddenly awakes disoriented in his office at the Ritz Hotel with strange markings and signs of violence on his body and no memory of the past seven years. He then discovers that Chelsee has been missing ever since the attack and is presumed dead. He sets out to find out what happened to him, what became of Chelsee, and to regain his past memories. In so doing, Tex uncovers a web of intrigue involving murders, double crosses, and the lost inventions of Nikola Tesla.

Tesla Effect: A Tex Murphy Adventure received mixed to positive reviews from critics. Mixed opinions of the game came mostly from general interest gaming sites, whereas more positive opinions of the game came from gaming sites focused on adventure games. It received an average score of 69.25% on GameRankings and a weighted score of 68/100 on Metacritic. The game's production values sharply divided opinion, with most praising the quality of the FMV portions, while criticizing the quality of the in-game graphics.

Tesla Effect was almost universally hailed as a faithful sequel, with much of both the game's praise and criticism hinged on its steadfast adherence to the conventions of the genre and series. Patrick Klepek from Giant Bomb remarked "It's unapologetic about its roots, even when it probably shouldn't be." Polygon's Justin McElroy wrote, "Series fans will love Tesla Effect, and it will make them deliriously happy," but added "If you weren't already a fan? You may be left wondering what all the diehards are so excited about." Among the conventions commonly criticized were the need to search for small, hard-to-find objects, and the ambiguity of dialog choices.

Adventure Gamers praised the game for its traditional adventure gameplay, arguing that "Tesla Effect doesn't reinvent the wheel, nor does it aim to. What it does attempt – and successfully accomplishes – is to mark the comeback of a beloved adventure gaming icon, and to do so in a way familiar to legions of fans." Likewise, Adventure Classic Gaming praised the game as "a perfect sendoff for a beloved series that has survived the rise and fall of a once dying genre" and "an easy recommendation for all Tex Murphy fans who long to see Tex return in full form."