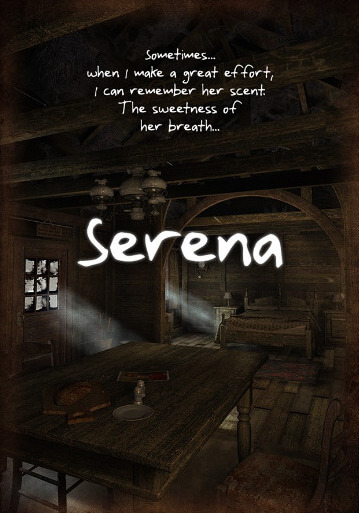 Serena is a freeware horror adventure game developed by several video game development companies, including Senscape, CBE Software, Infamous Quests, Digital Media Workshop and Guys from Andromeda. It was released for Windows, Linux and OS X. The game previews the Dagon Engine that was supposed to be used in Asylum. The main characters are voiced by Josh Mandel and Sarah Wilson (YouTube blogger Pushing Up Roses), as well as a cameo from Guys from Andromeda's Scott Murphy. Gameplay is first-person perspective, with fixed background screens and a point-and-click interface.

The game tells a story of a man (voiced by Josh Mandel) who is waiting in a cabin for his wife, Serena, but can't remember anything about her. As he explores more of the cabin and examines the varying items throughout, his memories about her and their relationship begin returning, evoking multiple changes in his emotion.

The title character is named after Serena Nelson, an advocate of adventure games funded by Kickstarter. For her activism, she has often been referred to as the "Hero of the Adventure Game Revival Movement". Following an incident where Nelson was outed for being a transgender person by a studio executive, the game designer Agustín Cordes made the game "Serena" in response to the perceived bullying of Nelson, and in support of her. The game neither involves Nelson's participation nor does the plot revolve around her treatment.