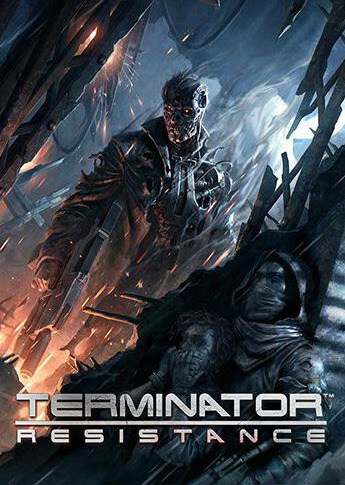 Terminator: Resistance is a 2019 first-person shooter action video game developed by Teyon and published by Reef Entertainment for Microsoft Windows, PlayStation 4, and Xbox One. It is based on the Terminator franchise, set during the original future war depicted in the films The Terminator and Terminator 2: Judgment Day.

Terminator: Resistance is set in a post-apocalyptic 2028 Los Angeles. Players take on the role of Jacob Rivers, a soldier in the John Connor-led human resistance against Skynet's robotic killing machines. The game will have multiple possible endings.

On August 29, 1997, the military computer artificial intelligence defense network Skynet becomes self-aware and creates a nuclear holocaust called Judgment Day. In the decades that follow, Skynet is locked in a war to exterminate humanity. Pockets of human survivors are organized into resistance military cells dedicated to strike back against Skynet, led by John Connor.

In 2028, Jacob Rivers becomes the sole survivor of his Resistance unit while deployed in Pasadena. While evading Skynet patrols, Jacob makes an alliance with a pocket of human civilian survivors composed of Jennifer and her surrogate brother Patrick, an elderly man named Ryan, scavenger Colin, and hospital nurse Erin. While gathering supplies for the survivors, Jacob meets up with a Tech-Com unit led by Commander Jessica Baron, and learns that she was forced to abandon his unit during the attack on Pasadena in order to minimize further resistance casualties. Recruited into Baron's unit, Jacob is tasked with carrying out reconnaissance missions in order to cripple Skynet. While carrying out his mission, Rivers is pursued by a Terminator infiltrator unit, and receives unexpected aid from an unidentified stranger. Convinced of the threat of the infiltrator unit, Baron provides shelter to the human civilians in Jacob's care. After suffering a sabotage in the Resistance defense systems, Rivers finally disables the infiltrator unit pursuing him.

With the Infiltrator units now a threat, John tasks Jacob with seeking out scientist Dr. Edwin Mack in order to enlist his aid for combatting Skynet. Upon meeting Mack, Jacob learns that Mack has developed the means to hack into Skynet's network and reprogram their forces into fighting for the Resistance; Skynet has been learning at a geometric rate; and Skynet has been creating Time Displacement Equipment in order to wipe out the Resistance. Mack provides Jacob the means to seek out the location of Skynet's central core, and requests Rivers to capture a Terminator's CPU in order to help reprogram Terminators for the Resistance. While carrying out his task, Jacob meets up with the Stranger, and is warned of an impending attack by Skynet. At this point, the fate of Jacob's allies become determinant on how much trust he has built up with them and whether or not he convinces them to leave the Resistance shelter; while also having to choose between warning Mack or assassinating him on Baron's orders due to an incident that left her lover killed by a Terminator.

Jacob leads an ill-fated raid on the Griffith Observatory where the Skynet Core was believed to be located. However, Jacob becomes the sole survivor again, with the Stranger dying to protect him. To make matters worse, Skynet assaults the main Resistance Shelter, annihilating Baron's unit in the process. Left with no other choice, and knowing the true location of the Skynet Core, Jacob brings his findings to John. While meeting with John, Jacob learns that the Stranger was his future self from an alternate timeline, and had helped play a key role in assaulting Skynet with John. Jacob and John lead a main assault force on Skynet's Time Displacement Equipment, while another Resistance unit destroys the Core. Despite the Resistance being victorious, Skynet succeeds in sending three Terminators before their defeat. The first one to kill Sarah Connor; The second one to kill John as a child; and the third Terminator tasked to kill Jacob at the beginning of the game. The game ends when Jacob makes the decision to either travel back in time to protect his younger self, or stay in the present and have another Resistance soldier take his place as the protector instead.

An epilogue shows an animated slideshow detailing the fates of Jacob and his allies, and the outcomes of the choices he made during the game.

In August 2013, UK video game publisher Reef Entertainment announced the acquisition of the video game rights from StudioCanal for Terminator 2: Judgment Day, and their intention to use them to create a video game with the working title Terminators: The Video Game.

Terminator: Resistance was announced in September 2019. It was developed by Poland-based Teyon, and published by Reef Entertainment. In Europe and Australia, Terminator: Resistance was released for PlayStation 4, Xbox One, and Microsoft Windows on November 15, 2019. The Windows version also received a U.S. release on November 14, through Steam. In the U.S., the home console versions were delayed from December 3 to December 10, 2019. The release was subsequently pushed back to January 7, 2020, due to unexpected manufacturing delays.

A sixth film in the Terminator franchise, Terminator: Dark Fate, was released shortly prior to the game's release, but the game does not have any relation or connection to its plot or characters, as StudioCanal does not own any of the rights beyond the first two films.

The PlayStation 4 version of Terminator: Resistance received "generally unfavorable" reviews according to Metacritic, while the other versions received "mixed or average" reviews. The Windows version received "very positive" user reviews from Steam players.

Wesley Yin-Poole of Eurogamer called it, "Generic and boring". Alex Avard of GamesRadar called it the best Terminator game he had ever played, but wrote that "given the series' historically poor record when it comes to interactive entertainment, that's an admittedly low bar to clear." Avard also called it the worst game he had played in 2019.