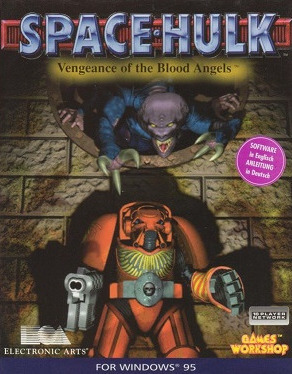 It's the 41st Millennium. For 20,000 years mankind has expanded forth throughout the galaxy aided by a phenomenal invention known as the Warp Drive, which allows huge spatial distances to be traversed in a matter of hours. Under the auspices of the Emperor; a psychic so powerful he is essentially immortal, a pan-galactic Imperium has been established in which mankind has spread and prospered. The defenders of the Imperium are the Adeptus Astartes, or Space Marines, bio-genetically engineered warriors of superhuman prowess, ever vigilant to destroy the many threats that face mankind across the cosmos.

The player is one such Space Marine, belonging to one of the oldest and most honourable Chapters known as the Blood Angels, whose battle honours date back as long as the Imperium has existed. He finds himself assigned to the Terminator company. Among the thousand warriors that compose a Space Marine Chapter, only the hundred most valorous and gifted brothers are deemed worthy enough of this honour. Terminators are the Chapter's ultimate warriors. They are protected by suits that make them all but impervious to conventional weaponry, and armed with the most devastating weaponry available.

Among the most insidious of mankind's enemies are Genestealers, a strange and terrifying alien race. They are huge armored six-limbed beasts, preternaturally swift and unbelievably ferocious in combat. A genestealer knows no fear, charging into combat irrespective of any threat to its life. Genestealers are incapable of reproducing amongst themselves, and must rely on other races to expand their population.

Upon encountering a suitable host, such as a human being, a Genestealer fixes its eyes upon it, mesmerizing it. While the host is thus hypnotized, the Genestealer deposits an egg-like cell that contains the Genestealer's genetic profile. This cell behaves like a cancer, altering the host's genetic profile. The victim gains some of the Genestealer's remarkable strength, resilience and longevity, becoming healthier than he was before. The offspring of any victim is born as a Hybrid, a corrupt creature exhibiting characteristics of both Genestealer and host species. The Hybrid passes on its genetic profile in a similar manner to its Purestrain parent. This cycle continues, with each new generation of Hybrid resembling the host species more closely. By the fourth generation, the offspring is barely detectable as alien save for a few give-away signs such as unnaturally sharp teeth and a purplish tinge to the skin. This fourth generation procreates in the conventional manner, and can result in either a Hybrid, a normal member of the host species or a Purestrain Genestealer, the only manner in which Purestrains can be produced. All the generations are linked in a psychic community, so Purestrains, Hybrids, and hosts all conceive of themselves as constituents of the same brood.

The manner in which Genestealers carry out their reproductive process is of exceptional danger to the Imperium, as whole planets can fall to the Genestealer threat; the affected humans look and act no different from normal, and the hosts are extremely secretive about the insidious curse they bear. Indeed, the first an external agency may know about the presence of Genestealers is once a whole planet has been affected by the curse, requiring total cleansing and repopulation. Imperial authorities are thus extremely keen to terminate the Genestealer menace at source, before it has a chance to affect any nearby planet.

The prime manner in which Genestealer came into contact with humanity is through the use of Space Hulks. These are spaceships of human origin which have become lost in Warpspace, either through a malfunction of the ship's Warp Drive, or just as a consequence of traveling in a medium as uncertain as Warpspace. The human occupants having died, Genestealers and their Hybrid brood move in, settling down to hibernation until the drifting Space Hulk comes into contact with a species riper for infiltration and domination.

In the initial stages of the game, the player controls a Terminator and must follow the orders given to them by the sergeant. As missions are completed and the story progresses, the player increases in rank and will subsequently have control of the squad or squads where there are more than five terminators under their command. The enemies featured in this title include the Genestealer as well as Hybrids, Chaos Space Marines, Magus, and Patriarchs making their appearances from the middle through to the latter stages of the Campaign game mode with only the Genestealers fought at all stages of the campaign.

Space Hulk: Vengeance of the Blood Angels, in addition to the main campaign storyline, has four training missions and thirty-four solo missions spread across three main categories: Space Hulk Originals, Classic Missions, and Famous Missions. All of these levels were also featured in the game's ten-player network mode, available over TCP or IPX networks with and additional six missions playable in either co-operative and a special deathmatch scenario in which players compete to kill the largest number of Genestealers in order to win the game.