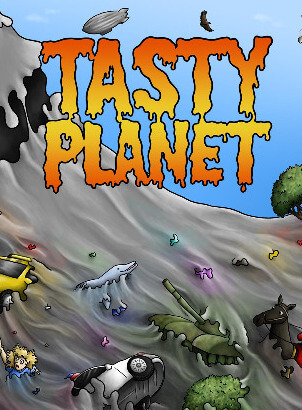 
Tasty Planet is a franchise of top-down video games published by Vancouver-based studio Dingo Games. The games are targeted at ages 8 years and older, and may be downloaded to Windows or Macintosh systems.

The games are focused on the evolution of a prototype bathroom cleaner, "Grey Goo". The levels follow the Grey Goo as it advances from eating dirt particles to bugs and leaves, and then eventually the rest of the universe. The game is arcade in style and has both a casual mode, where players can play for leisure without a timer and the full game which is timed and must be completed before the time runs out to complete the level. In the original Tasty Planet game, there are also 3 bonus levels called Endurance levels, which are long, and can take up to an hour to complete each.

A second game, Tasty Planet Back For Seconds, was released in 2010.

A third game, Tasty Planet Forever, was released in 2018.

Tasty Planet was the original game in the series, released in August 2006.

The plot is shown solely through comic strips at the end of some levels. The first comic strip shows a scientist telling his assistant about his latest discovery, the Grey Goo bathroom cleaner. They place it under a microscope, and the first level of the game begins. After the first two levels of the game, the assistant touches the Grey Goo, who bites him and enters his body. The scientist tells his assistant "Just go and wash your hands."

The Grey Goo is then washed down the drain and lands outside, where it moves to a park and grows in size. It then moves on to a picnic table where the scientist and assistant are having lunch. When they discover it, the pair throw the Grey Goo into the ocean. The Grey Goo then eats through the ocean and is launched by a whale into another park and then to a city. There, the Grey Goo faces its first war from humans, who attempt to use guns, tanks, etc. to stop it. It eventually launches itself into the sky and then into orbit around Earth. After eating the moon, Earth, and the rest of the solar system (including Pluto), it moves on to nearby stars like Alpha Centauri and beyond the Milky Way. However, its mass becomes too great after devouring the fabric of space and time, and it implodes thus causing the universe to begin again.

Tasty Planet is split up into 9 chapters, each containing a depending number of levels. They are listed in increasing size order as the Grey Goo grows.

They are Labs, Outside, Picnic, Ocean, Park, City, Sky, Orbit and Cosmos.

An additional option selectable from the main menu is the Endurance mode. These are variations on 3 existing levels. The only change is that the player grows extremely slowly, and it can take over an hour to beat one of these levels. They are considered the most difficult part of the game.