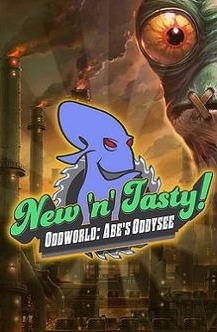 On March 14, 2016, it was announced that Oddworld Inhabitants are working on a follow-up to Oddworld: New 'n' Tasty! titled Oddworld: Soulstorm. The game page confirms that this title is inspired by Abe's Exoddus and that the new game is going to be a re-imagining of Abe's Exoddus. The game is due to be released in 2020. Additional developers were confirmed in late 2017 which include Fat Kraken and Sabotage Studio.

In Oddworld: New 'n' Tasty, the player controls a Mudokon named Abe. Similar to the original, the gameplay is a sidescrolling platformer with an emphasis on puzzle solving, with New 'n' Tasty reimagined in a 2.5D graphical style.

Abe has the ability to talk to and direct other Mudokons with an enhanced GameSpeak feature and the characters have more dialogue and responses when compared to the original game. The player's goal is to save all 299 Mudokon slaves (compared to 99 from the original game) at RuptureFarms which can be done by taking them to bird portals; several Mudokons are hidden in secret areas which often involve complex situations. As with the original, the game has two endings depending on the number of Mudokons rescued by the game's finale; rescuing 150 or more throughout the story is required for the Good Ending, whereas rescuing fewer than 150 Mudokon slaves results in the Bad Ending.

Abe has no direct way of attacking and there are a variety of ways to die in the game. He has the ability to chant and can possess specific enemies called Sligs; Sligs lack Abe's physical finesse (they cannot jump, for example) but all wield firearms, temporarily changing gameplay. Other enemies cannot be possessed, and must be dealt with by solving the many puzzles in the game, and often involve setting up elaborate traps. Some enemies in the game must be outrun; in some levels Abe has a mount called Elum that helps in this. There are some areas in the game which require the player the memorize Abe's whistles, farts and Slig's BS and SM'BS commands to unlock electric fences, allowing Mudokons to pull levers and platforms.

In the last chapter of the game (The Boardroom) - Abe pulls a lever that activates a death clock. From there depending on the difficulty level selected, Abe has a certain amount of time to turn off the gas. The normal time is 2 minutes on the Hard mode. If Abe doesn't turn off the gas within the time limit, said gas will come out from the tube and kill Abe. The player will see Abe falling and saying things like "Oh god gas!" or "I'm so outta here!" and choke to his death.

The game has more random generators than in the original game. Sligs have randomly generated AI and some flying mines also have random flight patterns.

To make use of the online functionality, the remake now comes with leaderboards. The makers observed fans of the original game making speedrun videos and competing with other people, and have enabled players to check the leaderboards for the fastest completion of each mode, the best overall time (any%), and how many online PlayStation Network, Steam, Nintendo eShop and Xbox Live members completed the game 100%.

Taking place on the titular Oddworld, much of the early and end-game takes place in RuptureFarms and its four "zulags", which comprise a meat processing plant. Other locations range from RuptureFarms' stockyards and free-fire zone, to the external mazes of the Monsaic Lines, Paramonia, and Scrabania. The two latter levels can be approached in either order and each feature a temple with multiple trials completed by lighting a flintlock and replicating the bell chime to unlock the exit door. Thereafter Abe must return to RuptureFarms to rescue the remaining Mudokons. The final level requires Abe rush to RuptureFarms' boardroom within a time limit to destroy the company owners and their robotic security system.

GameSpot's Daniel Hindes stated that the game is a remake that "was crafted with love and respect" and praised the puzzles, environments, new visuals, and the dynamic camera, but had issues with Abe's walking and running both being mapped to the left thumbstick, leading to occasionally imprecise platforming as he found himself running into traps when he meant to walk slightly. Hindes was also critical of in-game advertising, in which adverts for other video games appeared on in-game billboards: "For a game that is staunchly anti-capitalism, ... it seems contradictory for those billboards to then scroll to reveal a poster for an upcoming PS4 game." However, Hindes did concede that these ads were rarely seen.

Jim Sterling of The Escapist similarly applauded the game and its developer, writing that "It's hard not to be supremely impressed by what Just Add Water has done"; he enjoyed the entirety of the game, from the all-new aesthetics (which he said truly showcased the Unity Engine) and macabre sense of humor to "the brutal world that can require a lot of bloodsoaked trial and error". Sterling summarized his review stating, "Just as Abe's Oddysee was a classic of the PlayStation era, so too should Oddworld: New n' Tasty be a classic of the modern age. More than just a remake, this is a contemporary puzzle-platformer that charms, exasperates, and delights. This is how you do a reboot." Sterling's only criticism of the game was "the silliness of the corpse physics," noting that the ragdolls twitched and thrashed on the scenery almost consistently; conversely, Hindes appreciated the ragdoll physics, asserting that they "push the dichotomy between the dark subject matter and comedic attempts to survive even further than the original game."