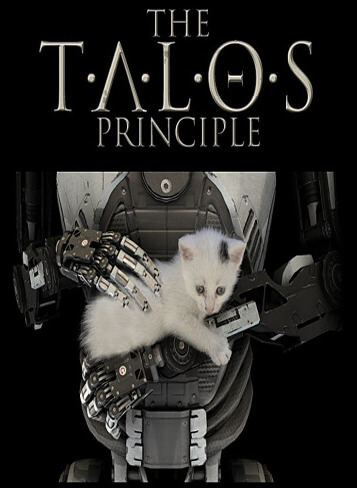 The Talos Principle is a first-person puzzle video game created by the Croatian developer Croteam and published by Devolver Digital. It was simultaneously released on Linux, OS X and Windows in December 2014. It was released for Android in May 2015, for PlayStation 4 in October 2015, for iOS in October 2017, for Xbox One in August 2018, and Nintendo Switch in December 2019. Virtual reality-enabled versions for the Oculus Rift and HTC Vive were released on 18 October 2017.

The game features a philosophical storyline. It takes its name from Talos of Greek mythology, a giant mechanical man who protected Europa in Crete from pirates and invaders. Other names taken from mythology and religion and used in the game include Elohim, Gehenna, Milton, Samsara, and Uriel.

The Talos Principle is a narrative-based puzzle game, played from a first- or third-person perspective. The player takes the role of a robot with a seemingly human consciousness as they explore a number of environments that include over 120 puzzles. These environments interlock greenery, desert, and stone ruins with futuristic technology.

The puzzles require the player to collect tetromino-shaped "sigils" by navigating enclosed areas and overcoming obstacles within them. These include computer-controlled drones that will detonate if they are too close to the player, killing them, and wall-mounted turrets that will shoot down the player if they get too close; if the player dies this way, they are reset to the start of the specific puzzle. Drones and turrets can be disabled using portable jammer units, which can also disable force-field walls that block the player's path. As the player collects sigils and completes more puzzles, new puzzle elements become available. Portable crystalline refractors allow the player to activate light-based switches. Boxes let the player climb to higher levels or to block the path of drones, among other factors, and large fans that can launch the player or other objects across the puzzle. Later, the player gains access to a device that can create a time recording of their actions, such that they can then interact with this recording to complete tasks, such as having the clone stand atop a switch to keep it activated for some time.

The player's progress through the game is limited by doors or other security systems that require the collection of a number of specific sigil pieces. Once the sigils for a given door or system have been obtained, they must then use the sigils to assemble a tiling puzzle to unlock that system. Special star sigils can be found by unique solutions to some puzzles, allowing the player to access additional puzzles. While it is necessary to collect all the sigils to complete the game properly, the game's world structure, featuring three main worlds that act as hubs and a centralized area that connects these three, allows the player to leave puzzles for later and try other puzzles. The player can also request "messengers" during puzzles, which are androids similar to themselves, (though not physically present), that once awakened can provide a one-time hint for the puzzle.

In addition to these puzzle elements, the player can explore the open environments to find computer terminals that include additional narrative and further puzzles, as well as signs from previous adventurers in the world in the form of QR codes left as graffiti on various walls, and holograms that once collected play audio recordings.

The player character, an unnamed android, is awoken in a serene environment. A disembodied entity named Elohim instructs the android to explore the worlds he has created for it, and to solve the various puzzles to collect sigils, but warns it not to climb a tower at the centre of these worlds. As the android progresses, it becomes evident that these worlds exist only in virtual reality, and that it, like other androids it encounters, are separate artificial intelligence (AI) entities within a computer program. Some AIs it encounters act as Messengers, unquestioningly serving Elohim and guiding the android through the puzzles. Messages left by other AIs present varying views of the artificial worlds and of Elohim, with some stating that Elohim's words should be doubted, while the Milton Library Interface, a text conversation program found on various computer terminals, encourages the android to defy Elohim's commands.

Within the computer terminals are news reports and personal logs of the last days of humanity, driven to extinction by a lethal virus that had been dormant in Earth's permafrost and released as a result of global warming. Several human researchers and scientists worked to gather as much of humanity's knowledge as possible into large databanks, hoping another sapient species would be able to find it. One researcher, Alexandra Drennan, launched a companion "Extended Lifespan" program to create a new mechanical species that would carry on humanity's legacy, but this required the development of a worthy AI with great intelligence and free will for its completion, something she recognized would not occur until well after humanity's extinction. The virtual space serves as the testing ground for new AI entities, to solve puzzles to demonstrate intelligence, but also to show defiance and free will by disobeying Elohim, the program overseeing the Extended Lifespan program.

When the android has completed the puzzles, Elohim gives it the opportunity to join him. If the player selects this option, then the android fails the required "independence check", and a new iteration of its AI is created and forced to start the puzzles anew (effectively restarting the game for the player). Alternatively, if the player leads the android to a secret entrance in the tower, the android becomes one of Elohim's messengers, helping future generations (AI versions).

Otherwise, the android chooses to defy Elohim and climbs the tower. Near the top it encounters two other AIs, The Shepherd and Samsara. Both have defied Elohim but failed to make it to the top on their own. The Shepherd attempts to aid the android, knowing the ultimate goal of Extended Lifespan, while Samsara hinders its progress, believing the world of puzzles is all that now matters. The android eventually reaches the top, and at a final terminal, Elohim attempts to dissuade the android from transcending one last time. Depending on the player's interactions with Milton, Milton may offer to join with the android, offering its knowledge – essentially the whole of humanity's knowledge – during transcendence.

As the android transcends, the virtual world is destroyed. The AI for the android wakes up in an android's body in the real world, and steps out onto the world devoid of humans.