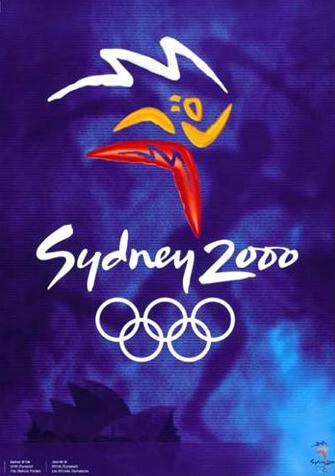 Sydney 2000 is the official video game of the XXVII Olympic Summer Games, hosted by Sydney, Australia in 2000. Developed by Attention to Detail and published by Eidos Interactive, it was released for the PlayStation, Microsoft Windows and Dreamcast. There were versions developed for the Nintendo 64 and Game Boy Color, but both versions were cancelled.

Although the button mashing-laden gameplay had not changed from previous games, the main competition itself become more complex with the inclusion of the Virtual Gym and a complete Olympics qualifying tour, composed by four stages, and the player can only run for the medals of the events he qualified for. While some of the events are the women's, each event is only set to one gender: it isn't possible to run the women's 100 m hurdles or the men's high jump.

Individually, there isn't much difference in gameplay from previous games: two action buttons control speed and there's a third for extra action: jumping, passing a hurdle, setting the angle and releasing the hammer or javelin, touching the wall, etc. All events rely on this formula, except, Skeet and K1 Slalom, and diving (which uses "click-a-long" rather than the freeform jumping of Olympic Gold) Chase Cycling also requires the player to pace himself, or the final cyclist will run out of long pace before the final sprint.

The biggest difference from previous games in the series lies in the Olympic mode: instead of starting in the Olympics, the player must improve and qualify an athlete for the event. Each event has four stages (Open Trials, Invitation Event, The Championship, and Olympic Class), and for each stage the player must complete minigames in the Cyber Gym that range from running on a treadmill, climbing a pole, squats or reaction training, for a total of 20 minigames. Completing a Cyber Gym game improves the athlete in one of the three ratings temporarily, and to earn the new capacities definitively, the athlete must complete an event with a certain score. After the player is happy with the athlete development, he can try to qualify for the next stage by running against other athletes at the same level. Although it's possible to compete in the Olympics as soon as the athlete reaches the Olympic Class, to get a perfect athlete (with 100% on all ratings) one must complete all minigames, including those on Olympic Class. As the game relies mostly on athletes' ratings, even players with lower button presses per minute can make World Record times without serious effort as long as they passed all the mini games. Other modes include an arcade mode, training and head to head, where two players can compete with their Olympic mode trained athletes. There are four difficulty levels altogether.

Although generally stable, the game lacks tweaking in some events: the High jump uses men's results, and while some events such as the 100 m sprint and triple jump are quite easy, others such as the javelin and hammer throw require lots of training.

Sydney 2000 received "mixed" reviews on all platforms according to the review aggregation website Metacritic. In Japan, where the Dreamcast and PlayStation versions were ported for release and published by Capcom on 26 October 2000, Famitsu gave the latter console version a score of 26 out of 40. GameZone gave the PC version a score of nine out of ten and said, "The graphical quality of this program makes it a sure-fire winner. What it lacks in some areas, it makes up for in others. If you are a fan of Olympic-style action, this is a must-have." However, Computer Games Magazine gave it one-and-a-half stars out of five and said that it was "a prime example of a game that should have stayed where it belonged--on the consoles," and that the game "simply isn't much fun; most of the time, it isn't any fun at all. It feels more like work than a good time and that's never a good recipe for success."