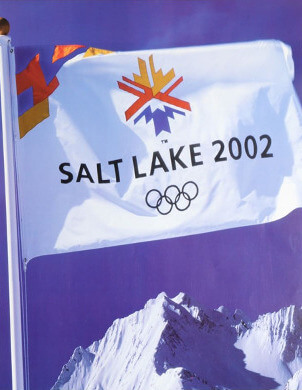 Salt Lake 2002 is the official video game of the XIX Olympic Winter Games, hosted by Salt Lake City, Utah, United States in 2002. Developed by Attention to Detail and published by Eidos Interactive (DC Studios/Ubi Soft for the Game Boy Advance version), it was released for Microsoft Windows, PlayStation 2 and Game Boy Advance.

There are four game modes: Olympic, Tournament, Classic and Time Trial. The Olympic Mode returns to the simplistic direct-to-competition mode, unlike Sydney 2000 that forced the player to qualify for the Olympics. Each players' victories are logged, and trophies/medals can be seen in a trophy room. Gameplaywise, the events are unevenly done. While the downhill/slalom events are reasonably simulated and playable (one can play downhill in first person view, and at easier levels missing a gate in the slalom does not disqualify the player), in ski jump and bobsleigh results are generally hard to predict or control.

The Game Boy Advance version of Salt Lake 2002 received "mixed" reviews, while the PC and PlayStation 2 versions received "generally unfavorable reviews", according to the review aggregation website Metacritic. In Japan, where the PS2 version was ported for release on 28 February 2002, Famitsu gave it a score of 25 out of 40.