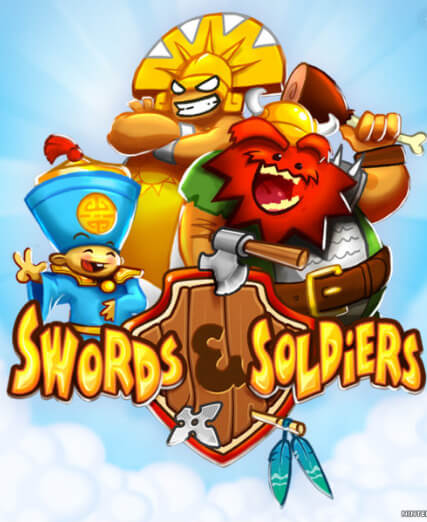 Swords & Soldiers is a 2D sidescrolling real-time strategy game by Ronimo Games. It was released in Europe on May 15, 2009, and in North America on June 8, 2009. It is available for Windows, Mac OS X, Linux, Android, Wii, PlayStation 3, iOS, Nintendo 3DS and Wii U.

Two Tribes announced that they will be bringing Swords & Soldiers to the Wii U eShop, which was released in North America and Europe on May 22, 2014.

In Swords & Soldiers, three factions (the Aztecs, the Vikings and the Imperial Chinese) are fighting each other to gain the powers of the gods. The game boasts both a single player campaign for all three factions and a skirmish mode, as well as competitive split-screen multiplayer and several other modes and minigames players can unlock by progressing through the game.

The single player campaign features 10 missions for each faction, with objectives ranging from conquering the enemy's base on the other side of the play area to surviving a full out assault from the enemy or infiltrating their defenses with a limited number of troops. Players collect gold and mana which are used to purchase units and spells. After being built, units automatically begin marching towards the enemies base and players cast spells to either strengthen their own units or directly attack their enemies. Players must make strategic decisions on what units to build and when to send them out.

Swords & Soldiers began development after THQ acquired the rights to its first game de Blob. While it was originally intended to be a flash game, the developers saw potential in the title and moved it to the WiiWare service. The development team was initially made up by seven developers and a "varying amount of interns", and the team used the offices of Dutch Game Garden to develop the game. Swords & Soldiers began as simply a split-screen multiplayer game featuring only the Aztecs and the Vikings. The developers validated this decision using arguments such as them not being sure how well WiiWare games sell, that the project was mostly to show that they could develop a game from point A to point Z, that the multiplayer component was one of the strongest features of the game, and that beginning with multiplayer allows the developers to balance the game right away. The single player mode was added after the developers implemented a single player tutorial, which they found fun. While they intended to only put a small amount of single player content, they ended up adding 30 campaign levels, additional challenge modes, achievements, and other features. They used extensive play testing to ensure that the game, especially the single player mode, had a proper difficulty curve and that the gameplay is not complicated. They attempted to utilize it to test the game's balance, but found that testers took too long with strategies to use it accurately with testing factions' strengths. The developers cited the play testers for helping them make it as good as it is and for creating a fan following on the Internet. Several features of the game were implemented late in the development process, including the ability to change the game's pace. A major addition was added balance, which they realized was necessary after discovering that the balance was very poor in spite of believing it to be much better initially.

The developers were focused on the idea they had for the game from the beginning. The visual style and gameplay were established early in the development, motivating the developers in how simply the development process progressed. In the first months of its development, the developers had created a tool chain and approximately 90% of the gameplay functionality. Two features of the game were unclear to the developers during development; a "troop manipulation" mechanic, a common feature found in other real-time strategy video games that allows players to control the movements of their units, was a feature that the developers wanted to include. They attempted to include it by allowing players to drag units backwards or stop them by clicking on them, but felt that such a feature took away from tactical decisions and put too much emphasis on micromanagement and twitch gameplay. The developers added menus to the main gameplay late in the game. The final version was described by them as a "very polished version" of the vision they had of what they wanted.

The audio of Swords & Soldiers was created as a collaboration between the developers and an external audio studio called Sonic Picnic, which was located near their offices, making it very accessible to them. The developers found Sonic Picnic to be helpful, receiving an audio experience from them that matched with their vision. Due to a low budget, the developers offered Sonic Picnic royalties, which Sonic Picnic accepted due to being impressed by the prototype. Developers stated that this process kept them motivated to finish the game. The voice samples for the characters and units were created by recording the various developers and putting their voices in the game.

Swords and Soldiers has received a positive reception from critics, garnering a score of 84/100 at Metacritic.

IGN gave the game its Editor's Choice award, calling it "one of the best console real-time strategy games ever" while praising the production values and personality of the game, as well as its unique approach to the genre. Nintendo Life called the game an essential download, praising the visuals, music and depth of the gameplay and noting the plethora of modes for players. Edge called it "a riot of colour and imagination" that "towers above everything else WiiWare currently has to offer". Official Nintendo Magazine called it "a colourful, vibrant and frankly brilliant console strategy title".