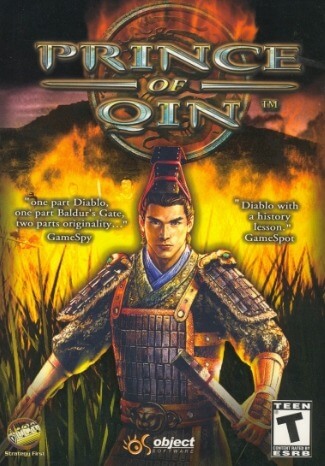 Prince of Qin (Chinese: 秦殇; pinyin: Qín Shāng) is a 2002 action role-playing game developed by Object Software and published by Strategy First. The story is set in China in the final years of the Qin dynasty (221–206 BCE), with Fusu – the heir apparent to the first Qin emperor, Qin Shi Huang – as the protagonist. Although the game has a historical basis, its setting is purely fictitious because the historical Fusu died in 210 BCE.

The game balances team-fighting, with up to five heroes per team, and the use of various skills and abilities. The player is challenged by many enemies in more than 100 unique scenes accurately depicting the society and architecture of the Qin dynasty. The game's novel features include multi-scenario and multi-ending systems, randomly created weapons, items and enemies, an equipment-creating system and a sophisticated fighting system rooted in the ancient Chinese philosophy of the Five Elements.

There are a total of 13 chapters in the story. In each chapter, the player has to accomplish a primary goal in order to proceed to the next chapter. The player may concurrently accept some secondary missions as well and complete them in any chapter before the finale.

Fusu, the Crown Prince of the Qin Empire, is ordered to commit suicide according to an imperial decree by his father, the First Emperor. General Meng Tian suspects something is wrong with the order and stops Fusu. Fusu flees from Shangjun with Meng Tian's help and arrives in the nearby Zhaocun Village. He makes a long and perilous journey back to the capital, Xianyang, to uncover the truth. Fusu is shocked to hear that his father had died and that his youngest brother, Huhai, has ascended the throne as the Second Emperor. He meets his childhood friend, General Huan Feng, and learns that there is something fishy about his father's death. He decides to enter his father's tomb to investigate.

Fusu seeks help from Xiao Qi, a craftsman well-versed in the techniques of laying traps. Xiao Qi sends his apprentice, Jing Wuji, to accompany Fusu on his quest. They need to find Tian Gang, an expert who was involved in the construction of the tomb, to find out how to enter the tomb. Fusu learns from Tian Gang that he needs to be equipped with two items before entering the tomb: a Gold Toad Pearl to neutralise the poisonous vapour in the tomb; one of seven magical swords (Ou Yezi's five masterpieces and the Gan Jiang and Mo Ye swords) to destroy the Dark Alloy Gate in the tomb. Fusu finds the items after a series of adventures around China. He navigates his way through the labyrinthine tomb, fights some terracotta soldiers in the process, and finally reaches the inner chamber where the First Emperor is buried. He examines his father's body and is shocked to discover that his father was strangled to death and had been poisoned over a long period of time.