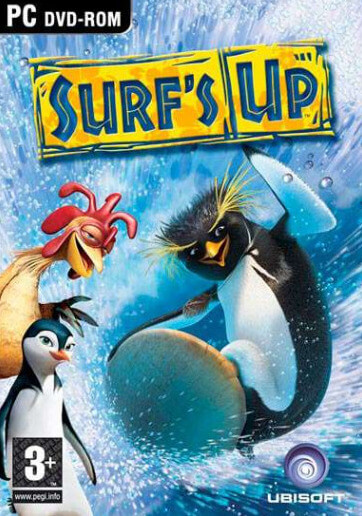 Surf's Up is the video game based on the Sony Pictures Animation film of the same name. Surf's Up the video game follows the basic story of Cody Maverick in the movie. This game was developed by Ubisoft and is available for PC and for various console platforms.

An Xbox port for the game was announced but was canceled due to low sales for the system.

As the name indicates, Surf's Up is a surfing style game (using mechanics often seen in most skateboarding video games) set at the annual "Reggie Belafonte Big Z Memorial Surf Off" as seen in the film. Players choose from one of 10 characters from the film "Surf's Up" to play as (including Elliot from Open Season), and will experience various spots on Pen Gu Island, from North Beach, to the Boneyards, as well as Cody's home of Shiverpool as they progress in the contest.

The players are given a set of objectives to meet in each match, including finding and collecting a set number of trophies scattered throughout the level, gaining enough points from performing tricks while surfing, and maneuvering through large gates. Each course has a large wave on either the left or right side of the screen that follows the player throughout, allowing the surfer to ride up and perform a trick as well as to garner speed for certain obstacles and ramps.

(0) Comments on "Surf's Up Full Version"