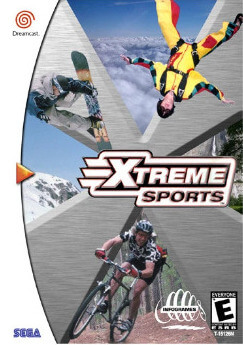 The Dreamcast version features a soundtrack licensed from the electronic music label Ninja Tunes and includes tracks from artists such as Amon Tobin, Coldcut, and DJ Food.

In the Dreamcast version, there are six extreme sports including bungee jumping and skysurfing. Players will have the opportunity to skirt down the side of mountain vistas and surf through the air on a snowboard, barrel over rocky trails on an all-terrain vehicle (ATV), hurtle off bridges on a bungee cord, hang glide through canyons and crevices, and race on a mountain bike.

Unlike other multi-sport games, which often has each event as a separate component, Xtreme Sports utilizes multi-event tracks, where players might snowboard down the side of a mountain and then get on an ATV that will take them to a cliff which they will sail off of on a hang-glider. There are 12 different tracks, each having a different order in which the various events take place, some incorporating each of the different sports. These tracks are situated in environments that seek to emulate real-life locations, such as Mount Kilimanjaro, Maui, Scotland, Stryn and the Himalayas.

The game was going to be a launch title for the European release of the game for Dreamcast but was delayed. It also was going to be released on Nintendo 64 as well but was canceled. The original publisher of the game was to be Eidos Interactive but didn't work out, and Innerloop Studios were still looking for a publisher for the game. Infogrames chose to publish the game along with other games for Dreamcast. Laddie Ervin commented, "Xtreme Sports is a fly-by-the-seat-of-your-pants virtual thrill-ride ... Whether a player is hang gliding, snowboarding or bungee jumping, they will feel totally alive -- and totally out of control!" The game had official licenses for the gear worn by the main characters and for the soundtrack of the game. It was to have a list of online options for players to upload and download high scores through a global server. It was also to have ghost riders and bonus tracks and was set for an October 2000 release.

The European version was edited by Sega instead of Infogrames. The game is renamed as Sega Extreme Sports and features prominent "Sega Sports" branding.

AllGame commented, "Xtreme Sports looks good but doesn't play well, a classic example of effort being put into visuals but not enough into the game's heart. When it comes to video games, style is important, but the substance that is paramount when it comes to rating a title. And while Xtreme Sports offers a distinct experience in the way it combines a number of different events into a single track, it doesn't focus enough on the gameplay of the individual sports to make the whole package compelling." GameSpot noted, "If you're expecting six perfect games wrapped up in one title, you'll only find disappointment. However, if you're in the mood for a game where each event is reasonably well designed and integrated into a greater, meatier whole, then Infogrames' Xtreme Sports should prove satisfying." IGN stated, "Certainly not the greatest game to ever slide down the pipe, Xtreme Sports is still not without some charm. Yes, it could have been better had a couple of the events been tightened up in the gameplay department, and yeah, it would have made a lot more sense had the characters been more diverse from one another (Is it me, or is EVERYONE five foot nine?), but I guess that's what sequels are for. A party game best set for rental, Innerloop, and Infogrames gives it the old university try!"