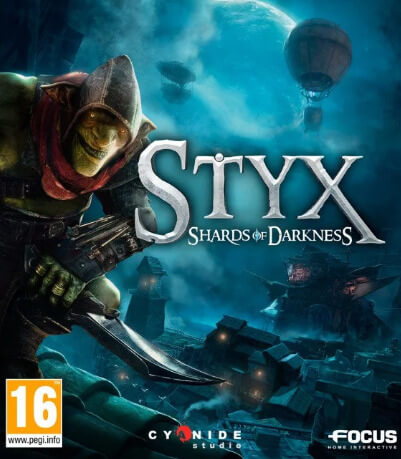 Styx: Shards of Darkness is a stealth video game developed by French developer Cyanide and published by Focus Home Interactive. The game was released worldwide on 14 March 2017 for Microsoft Windows, PlayStation 4, and Xbox One. It is the sequel to the 2014 game Styx: Master of Shadows, and the third game set in the fictional world of the Of Orcs and Men series.

Like its predecessor, Styx will be able to clone himself and to lay traps for his enemies, and will also be able to temporarily turn invisible. The player will have the option of engaging enemies or avoiding them. Ropes and grappling hooks can be used to reach high areas. There will also be a multiplayer co-op mode, with the second player controlling one of Styx's clones.

Styx is the only goblin of his kind. That being a goblin that can talk. Styx since his adventures in The flying tower of Akanash has made himself a home in Thoben. This home comes under threat when a new set of goblin hunters known as C.A.R.N.A.G.E. Begin recruiting in Thoben. Making Styx’s life hell.

The game was announced on 14 October 2015. Developer Cyanide confirmed that it would have a bigger budget and that it would run on a new engine. At the time of its announcement, it had been in development for six months. A new trailer was displayed at E3 2016.

Styx: Shards of Darkness received "mixed or average" reviews, according to video game review aggregator Metacritic. Destructoid's Nic Rowen Porreca scored the game a 7/10 with the consensus "A solid game that definitely has an audience. Might lack replay value, could be too short or there are some hard-to-ignore faults, but the experience is fun." Leif Johnson from IGN gave the game a score of 7.8/10 saying that "Styx: Shards of Darkness is a challenging stealth adventure with just as much snark as it has sneaking." Jon Morcom of PC Gamer awarded it a 79/100 stating that "A mean-spirited character leads a big-hearted game; you’re unlikely to dwell on its lore but its features combine well to create a satisfying stealth experience."