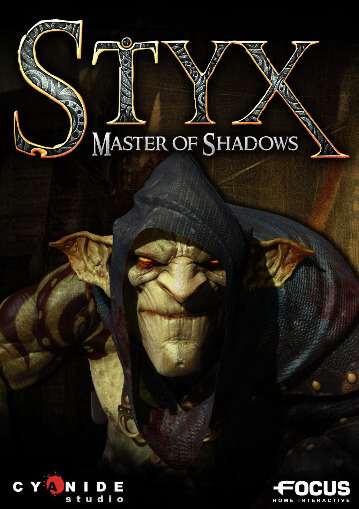 Styx: Master of Shadows is a stealth video game developed by Cyanide Studios for Microsoft Windows, PlayStation 4 and Xbox One. The game is a prequel, and the second video game to take place in the world established by 2012's Of Orcs and Men.

Styx: Master of Shadows is a stealth game where the player must keep to the shadows to survive. Styx has arcane abilities that assist him in his escapades, including the ability to make himself invisible (also featured in Of Orcs and Men), and the ability to use amber-vision to detect hidden foes and areas. His ability to clone himself through magic offers opportunities to disrupt the traditional stealth gaming formula. It gives the player a clone for purposes such as scouting without risk and creating a diversion.

Guards, soldiers and other protectors of the Tower will adapt their behavior dynamically, depending on the player's actions. The player is expected to keep a low profile and prepare a course of action beforehand: study the guard patrols closely, use areas of light and shadow to one's advantage, lure a target to a secluded area to assassinate him silently, or arrange "accidents" to remain undetected. Styx: Master of Shadows also includes RPG game mechanics, the player gains experience, which can unlock new skills, special moves, new and more lethal weapons, all divided into six talent trees.

Taking place before the events of the previous game, Styx infiltrates the Tower of Akenash, a massive flying fortress held aloft by the magic of the World Tree, around which the fortress was built. Styx desires to reach the heart of the World-Tree and rescue an imprisoned friend elsewhere in the fortress, but he doesn't know why he wants to do these things: he suffers from confused memories and a voice in his head that prods him on. When he finally liberates his "friend", he discovers that it is a goblin identical to himself. The protagonist up to this point has in fact been a clone of the real Styx, who has been held in an interrogation chamber all this time.

The original Styx was once an orc scholar who sought to study the World Tree, and somehow was transformed by the tree's magical amber into the first goblin. He has for centuries been plagued by the voices of the elves who sleep among the roots of the World Tree. The elves share a telepathic hive mind, and because they too are creatures of the amber, Styx can hear their chattering and cannot shut it out. Stealing the heart of the World-Tree will silence the elves permanently and possibly give him a means to become an orc again.

One of the gifts that the amber gave Styx was the ability to spawn clones of himself. Usually these clones are stupid thralls, but when Styx infiltrated Akenash he created a clone with an exceptionally high degree of free will and ability so that it could accomplish more difficult tasks without guidance, such as rescuing Styx if he were captured. The original Styx still considers this clone to be a disposable tool like all the others. Furious, Clone-Styx swears to destroy Original-Styx and make a new life for himself.

With the help of an elf, Clone-Styx breaks the telepathic control that Original-Styx has on him, then chases Original-Styx to the Heart of the World Tree. Clone-Styx destroys the Heart, then commits suicide by leaping into the pool of amber at the base of the tree. Hordes of goblins, all imperfect clones of Styx, emerge from the amber and tear Original-Styx apart. This is the birth of the goblin race. As the World Tree dies, the magic that kept Akenash aloft fails and the tower crashes to the ground. One clone, perhaps Clone-Styx, emerges from the ruins with his memories gone but with his intellect intact and the awareness that somehow his name is "Styx".

Styx: Master of Shadows received mixed to positive reviews. Aggregating review website Metacritic gave the Xbox One version 69/100 based on 8 reviews, the Microsoft Windows version 71/100 based on 31 reviews and the PlayStation 4 version 70/100 based on 9 reviews.

Britton Peele of GameSpot complained that the combat "feels stiff and unwieldy, making battle a painful experience whether you win or lose." William Murphy of MMORPG said "nothing is more frustrating in Styx’s adventure than its combat," though he also noted that "it feels a bit silly to knock a stealth-based game for its combat." However, some publications praised the system for disincentivizing confrontation. Geoff Thew of Hardcore Gamer said that Styx "makes full-on assaults next to impossible, and forces you to observe, think, and plan in order to advance.". Thew went on to say that, as a pure stealth game, Styx delivers "a satisfying tension that few games can match", and praised its levels for having "much more depth than the flat environments typical of the genre," concluding that Styx is "one of the best titles the stealth genre has to offer." Heather Newman of Venture Beat said that Styx is "truly engrossing for hardcore stealth fans, at a bargain price," and advised that you should "be ready to save often and die a lot — with a smile on your face."