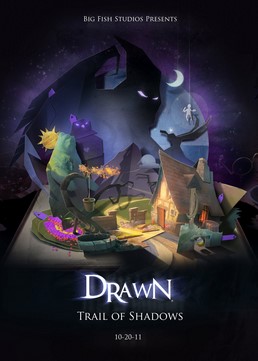 Drawn: Trail of Shadows is the third installment in the Drawn series. It tells the story of a young boy trapped in the painted world by an evil wizard, as told to Iris, the protagonist of the first two games, by her guardian. It was released for Windows and OS X on 19 October 2011 for all and for Big Fish Game Club members on 20 October.

Based on mismatching concept art, showing steampunk style pieces, in Drawn: Trail of Shadows and empty space next to all three previous games in "World of Drawn" in extras, suggests that a sequel was planned but canceled.