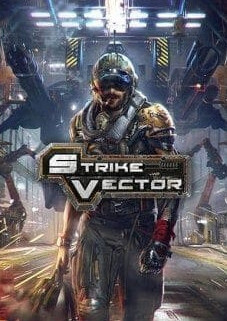 Strike Vector is a "Brutal aerial FPS" game developed by the French independent studio Ragequit Corporation. The game offers a hardcore learning curve, with a distinct old-school feel, reminiscent to games such as Crimson Skies and Quake 3. Strike Vector is centered on multiplayer but also offers a solo game mode called "Challenge mode".

The game is built on the Unreal Development Kit Engine. It was released for Microsoft Windows on January 28, 2014 on Steam.

Strike Vector is an arena shooter game like Quake 3. You fly the Vector, a hyper-speed VTOL, highly customizable and manoeuvrable Jet fighter. Your can instantly switch between 2 movement modes :

The game features a third-person view and first-person cockpit view.

The player can equip 2 weapons with infinite ammunition. Available weapons are :