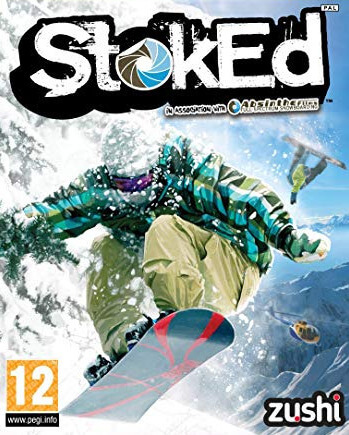 Stoked is a snowboarding video game developed by Austrian-based Bongfish GmbH for the Xbox 360 in 2009. It is the latest entry in the Stoked Rider snowboard game series and is in association with Absinthe Films. In 2009 an updated version, Stoked: Big Air Edition, was released for Xbox 360, and a Microsoft Windows version was released only for the PAL region in 2011.

It is the first game in the series to feature multiple mountains and real life sponsors, and also the first to be released on a console. It also has a real weather experience; for example, when it snows, powder builds up on the mountain. When it does not snow, rocks are exposed.

Stoked features an adaptive system where the game recognizes "stylish" riding versus "hucker" riding; this affects the player's score if they are known for riding in one way. The original game features five different open mountains including Almirante Nieto, Mount Fuji, Diablerets, Mount Shuksan, and Alaska. Originally the mountains are only ventured through set waypoints of a helicopter, but upon achieving a score of 50,000 points on every run of a mountain, the player will gain the helicopter license for that particular mountain, allowing them to designate their own drop points.

The game received "average" reviews according to the review aggregation website Metacritic. GameSpot noted "occasional unpredictable physics" but that Stoked was a "blast, and considering that this wealth of content is going for a bargain price, it's an easy choice for boarders looking for a virtual outlet for their shredding fantasies." IGN said that "touches like snazzy weather effects, cool challenges online and (eventually) in single-player would please the diehard boarders out there." It was asserted that "After Shaun White Snowboarding was released to a lukewarm critical reception late last year, it looked like fans of the genre were in line for a disappointing winter" however, although "Stoked wasn't a game that was on a whole lot of people's radars...the finished product garnered quite a bit of critical acclaim for shirking the unnecessary glitz of "extreme" sports games and focusing on the basics of snowboarding." In Japan, where the game was ported for release and published by Russel on January 28, 2010, Famitsu gave it a score of one six, two sevens, and one six for a total of 26 out of 40.