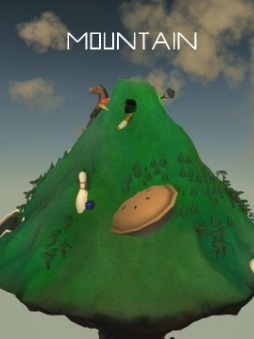 Mountain is a simulation video game developed by David OReilly and published by Double Fine Productions. It was released for Microsoft Windows, OS X, Linux, iOS and Android in July 2014. The game is an idle game in which the only influence the player can have on the game is at the start of the game where the player is tasked to draw objects. The game is designed to be played in the background while the player uses other applications.

Mountain is described by its creator David OReilly as a "Mountain Simulator, Relax em’ up, Art Horror etc." game, featuring little interactivity from the player. Upon starting the game, the player is asked to draw responses to a series of questions, described by OReilly as "more psychologically invasive than anything Facebook wants to know about you". The game uses that input to generate a model of a mountain, floating in space, surrounded by a small sphere of atmosphere. At this point, the game lacks significant interactivity; while the player can rotate the view around the mountain and zoom in and out, they cannot affect the mountain in any way. The game is set to be run in the background as the player does other activities on their computer.

Over the course of the game, the mountain slowly rotates as accelerated time progresses through day and night cycles and through seasonal changes: the player will see snow form and melt on the mountain, and plants trees grow and wither out. Randomly, the mountain may be hit by everyday objects which then become embedded in the mountain indefinitely. The mountain periodically offers its thoughts to the player as the game progresses. After around fifty hours while the game has been running, the mountain meets its fate when it crashes into a passing giant star, ending the game, at which point the player can start the game over with a new mountain.

David OReilly had developed a number of fictional video game sequences for the movie Her (2013). Following his involvement, OReilly had interest in creating a real video game, wanting "to explore in patterns and iterations of patterns". He considered the idea of simulating a mountain as "an iconic zen thing", and that the size of mountains dwarf that of the human experience; mountains further "defy objectification because they can't be owned or put in a museum". OReilly described Mountain as "visual silence", and that it is "about letting go of control" while one watches the simulation.

To develop the game, OReilly started learning the Unity engine himself. To complete Mountain, gained assistance from Damien Di Fede who did most of the game's coding.

OReilly had revealed the game during the Horizon video game showcase held at the Museum of Contemporary Art, Los Angeles during the same week in June as the Electronic Entertainment Expo 2014. The game was published by Double Fine Productions under their "Double Fine Presents" label aimed for small indie games.

The title was initially released on July 1, 2014 for Microsoft Windows, OS X, Linux, and iOS platforms; the Android version was delayed until August 19, 2014 due to the cost of getting the Unity plugin for Android. OReilly had initially visioned the game to run as a background application for personal computers, and thus had not spent a great deal of time optimizing the iOS version through the Unity engine. However, within a week of its release, Mountain was one of the top-selling titles on various app store charts, prompting OReilly to develop more optimization for the iOS and pending Android versions.

The game was generally praised by reviewers as a novel concept for a game, though because of its limited interactivity, many players were discontent with the title, comparing it to a screensaver rather than a game. Zack Kotzer of Vice compared the game to the Tamagotchi toys, though lacking the need to constantly attend to the toys' demands and instead letting the player decide when to see how the mountain is progressing. Others described the title as a passive Katamari game, watching how the mountain accumulates stuff over the course of the game. Some reviewers found the title pretentious; Ben Kuchera of Polygon felt the game may have been a joke by OReilly, and expressed he lacked the same type of wonder that other journalist had found for the game.