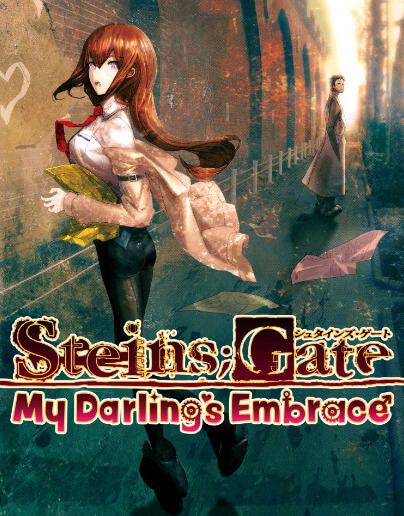 Steins;Gate: My Darling's Embrace, known in Japan as Steins;Gate: Hiyoku Renri no Darling, is a visual novel video game developed by 5pb., originally released for the Xbox 360 in 2011. It has since been ported to several other platforms, and was released by Spike Chunsoft in English for the Nintendo Switch, PlayStation 4, and Microsoft Windows in 2019. It is part of the Science Adventure series, and a spin-off from the 2009 game Steins;Gate. The game is a romantic comedy set in a different world from the one in the original Steins;Gate, where the player builds romantic relationships with Steins;Gate characters. By making certain choices and interacting with the player character's cell phone, the player can affect the direction of the plot.

The game was produced by Naotaka Hayashi, and featured scenario supervision by Tatsuya Matsubara, as opposed to the original Steins;Gate, where 5pb.'s Chiyomaru Shikura planned the story on his own; after having worked on the anime adaptation of Steins;Gate, he realized that, with the game world being fully established, he could let other writers work on it and bring in new ideas. The Xbox 360 release sold well, helping the sales of the Xbox 360 console in Japan. Critics enjoyed the game's writing and art, but criticized the opening theme.

My Darling's Embrace is a spin-off from Steins;Gate, and is a romantic comedy visual novel taking place in a different world line than those in the original game. In the world line the game takes place in, the characters still have the possibility to change the past by using D-mails, but SERN has little influence and does not have rounders hunt the main cast. Instead, the player character Rintaro Okabe's main problem is paying the bills for the laboratory, having to take a part-time job as a waiter. The game has multiple routes, each focusing on Okabe building a romantic relationship with one of the characters from Steins;Gate. The player affects the direction of the plot by picking choices, by answering Okabe's phone, and by clicking on highlighted text within text messages on the phone. The game does not feature any game over states or routes where the player loses.

The game was developed by 5pb., and was produced by Naotaka Hayashi. While 5pb.'s Chiyomaru Shikura planned the story for the original Steins;Gate game on his own, My Darling's Embrace was written by other writers under scenario supervision by Tatsuya Matsubara. This change came from when Shikura was working on the anime adaptation of Steins;Gate, and realized that since the concept of the game's world had been fully established, he could let other writers who understand the world work on Steins;Gate projects and bring new ideas to it. The concept for My Darling's Embrace as a romance game, according to Matsubara, came from how there was a trend in Japan to develop secondary games after the release of a visual novel, that explored characters more in depth; he did however not want to water down the main Steins;Gate narrative by portraying Okabe's struggle from the original game again, so he decided to set the game in a "peaceful, fun worldline".

Zenji Ishii at Famitsu compared My Darling's Embrace favorably to other bishōjo games, saying that it manages to create drama and tension despite how the game does not have a tragic element to it like the original Steins;Gate. He praised the writing as the work of a skilled scenario writer with a great understanding of the characters and world, and said that it manages to develop the characters and world further, giving them more depth, and that the portrayal of characters' emotions was well handled, allowing the player to feel immersed in the world. He particularly cited Luka and Moeka's routes as interesting, due to the different atmosphere that comes with a romantic route with an otokonoko character, and how the game manages to make the player reconsider their opinion on Moeka from the original Steins;Gate. He did note that because of the story's sense of safety and how it does not go off into a more serious direction, the game might feel unsatisfying and lacking of something impactful to some players, but also said that it fits in with the tone of the early chapters of the original Steins;Gate, where he considered the characters' everyday activities and light conversation part of what makes the game good. Richard Eisenbeis at Kotaku called the art excellent, and said that the game might "sate players' appetites" while waiting for the then upcoming game Steins;Gate 0. Patrick Gann of RPGFan criticized the game's opening theme, "La*La*La Labolution", as "wretched", particularly noting the singers' "super-cute, super-nasal unison choir thing", and saying that it alone ruins his listening experience of the Steins;Gate series music album. Famitsu gave the PlayStation Vita version of the game their "Gold Award".