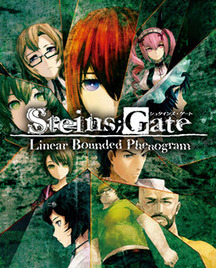 Steins;Gate: Linear Bounded Phenogram is a visual novel video game developed and published by 5pb. for PlayStation 3, Xbox 360, and PlayStation Vita in 2013, and later ported to iOS, Nintendo Switch, PlayStation 4, and Microsoft Windows; the PlayStation 4 and Windows versions were released internationally by Spike Chunsoft in 2019. The game is part of the Science Adventure series, and a spin-off from the 2009 game Steins;Gate. It consists of ten side stories set in different realities, and follow different Steins;Gate characters. Unlike previous entries in the Steins;Gate series, the game is nearly devoid of interactive narrative.

The game was produced by Tatsuya Matsubara, with character design by Huke. As 5pb.'s Chiyomaru Shikura felt that the Steins;Gate world had been fully conceived, he allowed a group of other writers create the game's story to bring new ideas to the series. Among these were Naotaka Hayashi, who had worked on previous Science Adventure titles and supervised the story, and Kotaro Uchikoshi, whose writing for the game was influenced by the anime series Code Geass.

Linear Bounded Phenogram is a visual novel in which the player advances through text and dialogue to read through several short stories; unlike previous entries in the Steins;Gate series, which let the player affect the flow of the story by sending specific messages from the protagonist's phone, the plot of the individual chapters in Steins;Gate: Linear Bounded Phenogram is not influenced by player input, barring the exchange of different e-mail messages with other characters. In the iPhone version of the game, the player picks up and puts down the in-game phone by holding the phone they are playing on vertically or horizontally, respectively.

Linear Bounded Phenogram was developed by 5pb., and was produced by Tatsuya Matsubara, with character designs by Huke. 5pb.'s CEO Chiyomaru Shikura wrote the game's theme song, "Phenogram", which was performed by Ayane. The project started with the concept of a Steins;Gate spin-off focusing on each character individually, with a more serious tone than the earlier spin-off Steins;Gate: My Darling's Embrace.

Unlike the original Steins;Gate, where Shikura came up with the story himself, the story of Linear Bounded Phenogram was crafted by a group of writers: The script was written and supervised by Science Adventure series regular Naotaka Hayashi together with guest writers Baio Shimokura, Masahiro Yokotani, Kiyomune Miwa, Teru Arai, Shogo Sakamoto, Masashi Kigasawa, Toru Yasumoto, Kougetsu Mikaduki, Keiji Akatsuki, and Kotaro Uchikoshi, who each wrote one scenario.

The decision to let new writers work on the game came from when Shikura was working on the anime adaptation of Steins;Gate, and he realized that the game's world was already fully conceived, which meant that he could let other writers who understand the world work on Steins;Gate projects, bringing new ideas into it. Matsubara contacted people who had been involved with different Steins;Gate media and were knowledgeable on the series, and the writers themselves picked which of the main characters they wanted to write about on a first-come-first-served basis. Matsubara said that this resulted in them getting to work on characters they liked and were good at portraying.

Uchikoshi did not work sequentially on his scenario, "Abduction Across Three Worlds", instead choosing to write in a disordered style, going back and forth, writing different parts in parallel. A large influence on his scenario was the anime series Code Geass (2006–2007), with the character Lelouch Lamperouge influencing Okabe's "wannabe bad guy" characterization.