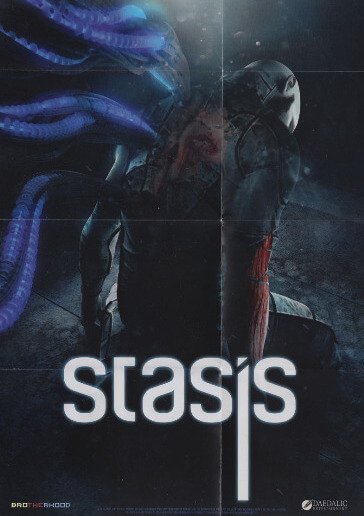 Stasis is a 2015 science fiction horror point-and-click adventure game developed by The Brotherhood. Viewed from an isometric perspective, the game requires interactions with computers, combining items and puzzle solving. The game was released on 31 August 2015 for Microsoft Windows and Mac OS X, with Linux and mobile devices planned for future release.

The game centers around the main character John Maracheck who awakes from Stasis aboard an abandoned spaceship. Maracheck must unravel the mysteries aboard the spaceship "Groomlake" to find his missing wife and daughter, before the spaceship plunges further into Neptune's methane clouds.

The game has been compared with the science fiction horror film, Event Horizon, and the psychological horror adventure game Sanitarium.

The game adopts the classic point-and-click system to allow interactions with the environment and utilises PDA data to help unravel aspects of the story.

The game's soundtrack has been composed by Mark Morgan, with additional by Daniel Sadowski.

The game was part funded through a Kickstarter crowdfunding campaign, raising $132,523 in December 2013. By that time, the game had already been in development for three years by The Brotherhood, a three-man team based in South Africa. This allowed for an alpha demo of the game to be released alongside the campaign.

Tarryn Van Der Byl of IGN interviewed Stasis creator Chris Bischoff on October 16, 2014, who listed the influences of the game from the films Alien and Event Horizon to gameplay aspects from Dead Space. A Beta was launched in August 8, 2015 for backers. The game has been officially released in August 2015.

Cayne, a prequel to Stasis, was released for free in January 2017.

The game received generally positive reviews, with a score of 79 out of 100 on Metacritic. Rock Paper Shotgun was positive towards the game in their review, saying "Despite some characterisation wobbles and a somewhat perfunctory final mile, STASIS is the best adventure game I’ve played in years. It’s also one of the most impressive horror games I’ve played lately." Destructoid awarded it 8.5 out of 10, saying "STASIS is a game that is not to be missed by anyone craving an eerie and sinister experience." IGN Africa awarded it 9 out of 10, saying "The Brotherhood's debut game is as brilliant as it is profoundly disturbing."