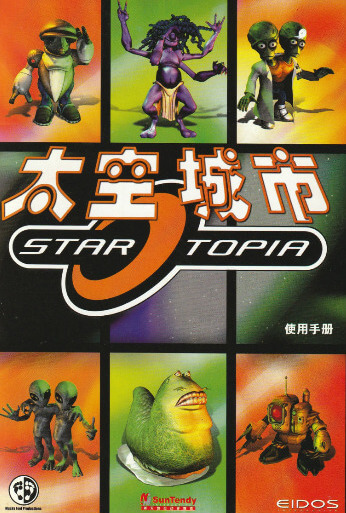 Startopia is a video game by Mucky Foot Productions (formed by ex-Bullfrog employees) and published by Eidos in June 2001, in which the player administers various space stations with the task of developing them into popular hubs. The game has a comical overtone, with lighthearted humour and cartoonish aliens. The game was re-released on GOG.com in September 2012, and was added to the Steam catalogue in October 2013.

Startopia was shortlisted for BAFTA PC Game of the Year in 2001.

The player is tasked with developing a series of space stations according to the wishes of various employers. The game is set after an apocalyptic galactic war, and many of the stations are in a state of considerable disrepair. It is hinted that these space stations are essentially the last few space-based environments available to the denizens of Startopia, as most of them had been destroyed during the galactic war.

The player has no direct control over the aliens that wander about the station. Instead, it is the player's job to construct rooms and hire aliens to staff them. The rooms provide basic necessities as well as recreation, encouraging visitors to remain on the station and continue spending money. Each type of alien is suited to a particular kind of task, and individual aliens have a set of statistics that determine their value as an employee. The actual goal for the player varies from one scenario to the next; in some scenarios, the player is expected to meet an economic goal, while in other scenarios the player is required to perform a specific task such as converting a certain number of aliens, or taking over the entire station by force. A sandbox mode is also available.

As with most business simulation games, the player builds facilities and hires workers to operate them. Some rooms take care of basic necessities such as food, sanitation, and health care, while others provide entertainment or love. Visitors may be hired by the player to remain on the station and attend to its facilities.

In addition to normal visitors, the station can also receive enemy agents. An agent can be disguised as a normal alien or appear as a shady human character sneaking around the station.

Each space station is subdivided into a number of segments into which the player may expand. These segments are initially isolated by bulkheads, which can be opened for a fee if the segment is vacant.

Startopia draws inspiration from and makes frequent references to mainstream science fiction, such as Star Trek, 2001: A Space Odyssey (the player's assistant computer VAL is a parody of Space Odyssey's HAL), Red Dwarf, and The Hitchhiker's Guide to the Galaxy. Startopia is dedicated to the memory of Douglas Adams, author of The Hitchhiker's Guide, who died during the game's production.

Startopia received generally favorable reviews upon its release. It holds an average of 85% and 86/100 on aggregate web sites GameRankings and Metacritic.

During the August 2019 gamescom, Realmforge Studios and Kalypso Media announced Spacebase Startopia, a new game based on Startopia. The new game, slated for release in Q3 2020, will include both competitive and co-operative multiplayer elements.