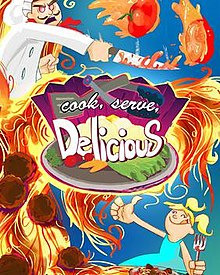 Cook, Serve, Delicious! is a restaurant simulation game released in 2012, developed and published by Vertigo Gaming for Windows. The game was released on October 5, 2012 for PC, and for Steam after a period on Steam Greenlight on October 8, 2013. The game was later ported to Mac, iOS and Android. A sequel to the game, Cook, Serve, Delicious! 2, was released on the September 13, 2017.

Cook, Serve Delicious! was designed and produced by Vertigo Gaming in October 2012. It was developed by David Galindo, with art from Sara Gross and music from Johnathan Geer.

Cook, Serve, Delicious! was inspired by the PlayStation game Ore no Ryouri, which was released in Japan in 1999; Galindo had obtained a demo for the game through a gaming magazine and was intrigued by the approach and rush of the game, and inspired him to create a free fan-made game in 2004, using hand-drawn graphics. While the game was popular, and he wanted to make a sequel, he had not sufficient funds to put into its development for it until after he had some success in releasing The Oil Blue, his first attempt at a full game.

Work started on Cook, Serve Delicious! around March 2012, with plan to release in mid-2012 as to hit during the mid-year lull of major released. As Galindo was not a programmer, he used GameMaker Studio 8.1, which at the time was in beta development for creating Microsoft Windows releases and later would be expanded to include macOS and iOS support later; he wanted to get the game released for Windows first and then release other versions once the full GameMaker Studio version was out.

Downloadable content was released for the game, with the name: Cook, Serve, Delicious: Extra Crispy Edition, which added ten new foods to be placed on the menu, new music tracks, controller support and support for local cooperative gameplay.

Cook, Serve, Delicious! centers on an old, worn down restaurant in need of repair. The tower building in which the restaurant is included has had its business drop, but has tasked the player with changing that fortune. The player is given money, and a choice of twenty foods to place on the menu, but the player can increase this amount by purchasing new equipment for the kitchen with profit made from selling food to customers. Customers will ask for a variety of food and drink, as well as sauces, additions and toppings.

The player will also have to contend with menial tasks in game, whilst making sure customers are correctly fed, tasks such as washing dishes, throwing out the garbage, and flushing the lavatory. Serving too many fattening or boring foods at the same time will turn customers away, while serving the same foods day-in and day-out will cause them to become stale and less attractive to customers. The player has up to 8 cooking stations to cook food simultaneously; known in game as "holding stations".

Reception of the game has been mixed to high. Hooked games gave the game a 7.4/10 rating, commenting that the game is 'surprisingly difficult at times', and that it 'has a lot of charm', but also called the game 'repetitive'. Touch Arcade gave the game 4.5 stars, when rating the iPad version, but did not think the simplified controls made the game better. The Stereogram was very positive about the game, saying it was "much, much more than the sum of its parts."

148 apps reviewed the app version saying that the game took "the best elements of every restaurant simulation game" and was "one of the most enjoyable and addictive games they've ever played." They also praised the game's soundtrack and gameplay "The ultra-smooth touch controls make Cook, Serve, Delicious a joy to play."