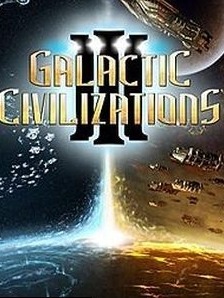 In October 2013, Stardock announced that the third installment in the Galactic Civilizations series was in production. A pre-release version was made available through Steam in March 2014, which allowed customers to play the game while it is still in development. It was the first game in the series to feature multiplayer and hex-based game tiles. The full version of the game was released in May 2015. The game's first expansion, titled Mercenaries, was released in February 2016.

Ten years after the war against the Dread Lords, the Drengin Empire and their Yor allies reign supreme. Most of the races which allied against the Dread Lords have been exterminated or subjugated. Earth lies protected, yet isolated, behind its Precursor shield. In 2242, the Terran First Fleet returns from the pocket universe with advanced technology and a mission to liberate Earth. The three missions of the campaign detail the fleet's efforts to liberate Arcea, deal with the Thalan, and finally dismantle the Drengin presence in the Sol system before bringing down the Precursor shield. The lifting of the shield allows the massively rebuilt Terran Alliance fleet into the galaxy, thus beginning the "Terran Crusade" the Thalan had previously warned about.