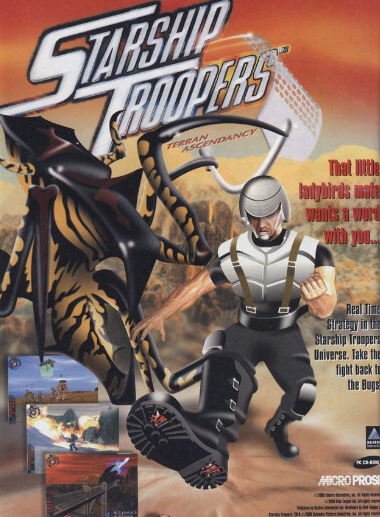 Starship Troopers: Terran Ascendancy is a real-time tactics video game developed by Blue Tongue Entertainment and published by Hasbro Interactive under the MicroProse label on October 28, 2000. The game is based on both the 1997 movie Starship Troopers and the book Starship Troopers by Robert A. Heinlein.

The game is divided into three acts following the player's Mobile Infantry platoon from the start to the end of the war.

Five months have passed since the capture of the Brain Bug, and Arachnid Egg Fall Clusters have been attacking various planets in Terran-controlled space. The player's platoon was tasked with escort missions for Internal Security's officer Major Alexander Bishop, while repelling an Arachnid invasion of Mars, attempting to recapture a colony called New Wellington from the Arachnids for morale purposes, as well as learning the true nature of how the Arachnids were able to efficiently attack the Terrans especially with a key food processing facility and the loss of two key military research bases. Bishop and the player's platoon is deployed to Axel 6, a small mining outpost with very little strategic value to exfiltrate the commanding officer of the base as a potential witness. Major Bishop and the player learn that a high-ranking Federation officer, Colonel Holland, has been leaking intelligence of the major Terran bases to the Arachnids via the captured Brain Bug, in hopes of uniting humanity with the bugs. Bishop and the player's platoon succeed in killing Holland and the captured Brain Bug while saving scientists who were witnesses to Holland's treachery. Despite the nature of Holland's behavior, the Terran Council decide to cover up Holland's death for morale purposes and finish the battle.

As of September 20, 2371, the Federation has managed to create new weapons and technology for use against the Arachnids and has begun a counter-offensive against the Arachnids to ensure the end of the war. The player's platoon was tasked with rescue missions for stranded Mobile Infantry troopers on Planet P, as well as students from a military academy used to train Psychics on the planet Sirius 3, and recovering ancient teleportation technology on Planet G. Shortly after the success of the mission, the player is sent to Klendathu for the second and last time to search for an Arachnid Queen. Utilizing psychic troopers to track the queen, as well as reverse-engineered teleportation devices for extraction, the player's platoon fights through arachnid forces to plant Nova bombs in the hive and manages to escape the cavern before it explodes. The war ends on New Year's Day of 2372, with the Terran military celebrating their victory.