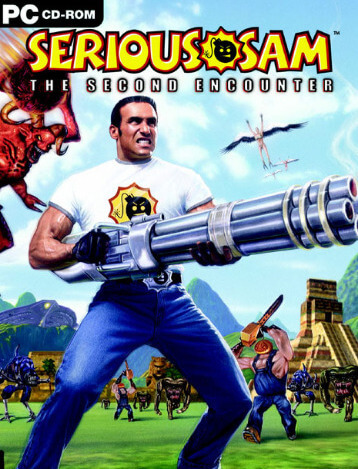 The Second Encounter starts where the previous game left off, with Sam traveling to Sirius on the SSS Centerprice. Unfortunately, the starship is accidentally hit by the "Croteam crate-bus" and plummets down to Earth's surface. As the starship falls, Sam reads the coordinates and frets about crash-landing into Egypt again, but instead he crashes into Central America in the Mayan age, with the starship now heavily damaged upon impact. However, not all hope is lost, since the Sirians left a "back-up starship" on Earth, which was a fail-safe in case anything ever happened to the SSS Centerprice. However, since this back-up starship is located in a different time and age than where and when Sam currently is, he will have to uncover the locations of the Sirian portals that will help him reach his destination. With this new objective, Sam storms through Mesoamerica, then travels to Mesopotamia and finally to Medieval Europe where the back-up starship is located.

During his journey, Sam battles two of Mental's portal guardians: a powerful Mayan spirit named Kukulkan the Wind God and a biomechanical creature called the Exotech Larva. Finally, in front of the Cathedral of Sacred Blood, Sam confronts the last obstacle to overcome on his path to the Holy Grail, Mordekai the Summoner. After a glorious battle with Mordekai and his spawning minions, The Summoner is finally silenced forever. In the Cathedral, Sam lifts the Holy Grail in the palms of his hands, followed by his sarcastic confessions of his sins in a booth to Mental, during which he tells Mental that "he's coming to get him." During the end credits, Sam activates the back-up starship, which turns out to be a rocket, and travels back into space toward Sirius, with the "Croteam Big-Heads" cheering him on. The story continues on to Serious Sam II.

Other than the more varied locations, The Second Encounter features some additional weapons—a chainsaw, a flamethrower, a sniper rifle, and the powerful Serious Bomb—and a number of new monsters that Sam has to face. This game has also seen the release of a level-pack titled Dark Island, featuring fan-made levels for single and multiplayer mode. The Second Encounter soundtrack featured three instrumental songs from the Croatian heavy-metal band Undercode.

My Girlfriend Is the President
hit
upd
new