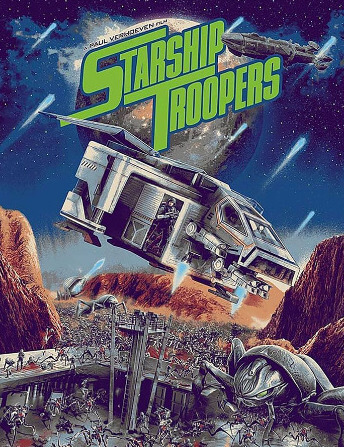 Starship Troopers is a first-person shooter game developed by British company Strangelite Studios and published by Empire Interactive. The game is based upon the 1997 film Starship Troopers by Paul Verhoeven.

Set five years after the events of the film, the game lets players assume the role of 'Marauder Zero Six' as they assault the planet Hesperus which has been invaded by the Arachnids. The game features footage from both the original film and the sequel Starship Troopers 2: Hero of the Federation (2004).

The single-player game features a campaign mode consisting of a series of missions connected by mission briefings. After a level is completed it is then available to play in a Level Attack mode, which is similar to a time trial mode, except a score and the number of kills are also recorded.

There are three different levels of difficulty, easy, medium, and hard. The level of difficulty affects the AI of the bugs, which means they will notice a player, and begin to attack him/her sooner on hard than on easy. The different levels also affect the amount of ammunition and grenades available throughout the missions, and the health of the bosses.

Most missions involve a player completing a single objective, with obstacles on the way. For example, the player's ultimate objective is to rescue comrades. The player may have to find the soldiers, protect them, retrieve supplies, fix equipment, and then escape.

During the course of a mission, a player may run into one or more bosses, often a Royal warrior or a bug that performs a heavy support role, such as a plasma bug or a tanker. As the game progresses, and tougher enemies are introduced, better guns are made available to the player.

Multiplayer in Starship Troopers consists of three different modes; Deathmatch, Team Deathmatch and Co-op. The most popular mode is Co-op which sees players defending a mechanic from an onslaught of arachnids whilst retrieving parts to repair a dropship to escape in. The network and lobby functions of Starship Troopers were provided by Demonware who have now withdrawn the services.

Promised dedicated server and modification tools were never released, along with the closing of the official English forums player numbers in the multiplayer game were very low. The game also lacked any console or server commands which makes it impossible to execute a variety of necessary admin functions such as kick, ban or a map change. Lastly as the balancing of the weapons is directly inherited from the single-player mode this means that deathmatch play is not very competitive. A player who picks up the rocket launcher for example is likely to dominate the game because it deals significantly more damage compared to many other weapons, has an area of effect, can be fired rapidly and has a very large magazine.

The game received mixed reviews, scoring 3.8 (out of 10) on GameSpot and a 5 (out of 10) from IGN, with both sites stating technical issues, such as problems with the AI and archaic graphics as the reason for the low score. There are also very few character models, leaving most troopers looking identical. The sound bites used for the troopers voices are also repeated many times throughout the game, with some bites placed at inappropriate times.