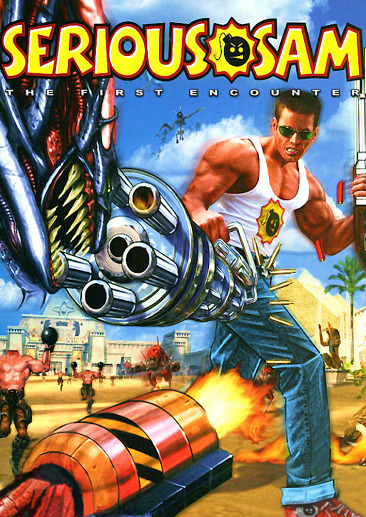 The First Encounter was the first game in the series; it had been in the making since 1996 and had a video showing its early game play in 2000. The First Encounter was originally developed by Croteam as a demonstrator for their engine and this is the reason why some countries saw its initial release priced at less than half the price of other games in the genre.

The game takes place after the events of Serious Sam 3: BFE and the introduction reveals what happened before the actual story took place. In ancient times, Earth was involved in a massive conflict between Mental, an evil extraterrestrial being who wants to rule the universe, and the Sirians, a technologically advanced sentient alien race that left many of its artifacts to be discovered by humanity. In the 22nd century, Mental and his army of grotesquely twisted monsters return to Earth intending to destroy humanity. The humans are quickly overwhelmed and driven back to Earth. As a last resort, humanity uses the "Time-Lock". This mysterious Sirian artifact contains the power to transport a single person back to a chosen point in time. Because of his bravery in fighting these monsters, Sam "Serious" Stone is chosen to use the Time-Lock in hopes that he will defeat Mental and change the course of history. As the game opens, Sam appears in Egypt. He travels from one Egyptian monument to the next, fighting against the monsters Mental sent after him along the way.

During Sam's journey, Sam is able to find and activate a hidden Sirian communicator in the shape of an obelisk located in Luxor, which summons a Sirian starship to Earth from deep space. Sam rushes to the Great Pyramids of Giza in order to rendezvous with the starship, only to be cornered by Mental's general, Ugh Zan III. After defeating the giant, Sam then teleports himself onto the starship. While Sam is aboard the "SSS Centerprice", he leaves a phone message to Mental telling him that "he has a special delivery package for him" and sets a course to Sirius, the Sirian homeworld.